A lot has been written and spoken about the absence of Muslim candidates from BJP’s list in Uttar Pradesh (UP). Without a doubt it seems inconceivable that BJP could not field even a single Muslim candidate from a state which has nearly 19.5% Muslim population (over 40 million). The explanation given by BJP President, Mr Amit Shah, was that there was no deliberate attempt to bar any eligible Muslim candidate. The party focussed only on the criteria of ‘win ability’ of candidates and who so ever fitted the bill was given a ticket. The Home Minister, Mr Rajnath Singh went on record to say that Muslim candidates should have been given some seats. So then where does the problem lie?

It is a known fact that while UP has the largest Muslim population in any state in the country; it also has the largest Hindu population. In as many as 70 Constituencies there is more than 30% Muslim vote which can be quite decisive. Yet for any Muslim candidate to be successful, he or she has to get some non-Muslim votes. On the other hand, purely on demographic basis, a Hindu candidate could hope to get elected on Hindu vote alone. In real life the later too is unlikely to happen since party affiliations, local stature of the candidate, financial resources available and at times the muscle power of the candidate become the dominant factors to lure voters – Hindus & Muslims included.

The general perception about BJP, spread maliciously by its detractors, is that it is a right wing Hindu party that wishes to promote Hindutwa – the dominance of Hindus. Frankly nothing could be farther than truth here. What the party does believe however is that Hindus and Hinduism cannot be side lined by the government in its quest to appear secular and efforts to promote minority communities or religions. In short BJP does not follow the policy of minority appeasement at the cost of majority.  Most pseudo secularists conveniently forget the fact that India is predominantly a Hindu country with over 82% of the population being Hindu. This is as true as steel and nobody can just wish it away. The problem in our country has been the deliberate linking of development of societies or communities with their religion and caste rather than their economic status. The focus has always been on freebies rather than development at grass root levels for sustained results. Congress is guilty of practicing such warped policies for decades to develop vote banks. Other regional parties have followed suit to exploit the same to the hilt. UP is a prime example in this regard.

Today most minority communities tend to believe that it is their right to seek precedence over the majority Hindu population when it comes to government sops, development funds and projects. This has been the bane of Indian development story that has hurt the nation as a whole and UP in particular to no end. It is no secret that BJP wants to correct this mistake and ensure an equitable distribution for all including the majority community. Is it any wonder that there are very few takers among the Muslim population today for BJP’s ‘Sabka Saath, Sabka Vikas’ approach to development? Given this state of affairs will any Muslim candidate opt to go with BJP in UP? The answer is a big NO since his own community will eye him suspiciously and that would be the end of his aspirations to be elected. No aspiring Muslim politician would like to commit this hara-kiri.

In the present environment in UP, it would be next to impossible for any Muslim candidate to sell BJP’s ideology to his community. Initiatives like ‘Beti Bachao, Beti Padhao’, ‘Swachh Bharat’, ‘Digital India’, ‘Pradhan Mantri Ujjawala Yojana’, ‘Uniform Civil Code’ or ‘Jana Dhana Yoajna’ are all unbiased schemes that will benefit every citizen of the nation without any religious or community bias. Unfortunately some minority leaders misinterpret and misrepresent the schemes deliberately within their communities to further or protect their own selfish interests. The success of such schemes in the Muslim society will reflect only if their own local leaders educate and encourage them to be part of such initiatives. Some time back Mr Owaisi of AIMIM made a general statement in a public debate on national TV that there was very little inclusion of Muslims in the Jana Dhana Yojna and very few accounts were opened. On being asked what efforts were put in by him or his party to encourage poor people to open new accounts, he had no answer. The situation in UP, particularly in the Muslim community, is no different. With almost all other political parties joining hands to work against BJP and its initiatives aimed at inclusive development, the task becomes even harder. 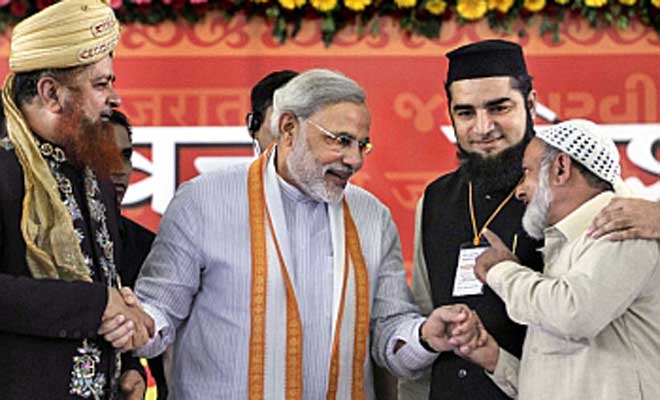 There is an imperative need for the Muslim community in UP (and elsewhere) to introspect and see why they continue to languish even as India moves forward. There is very little hope for a better future unless it comes up with some more liberal, better educated and selfless leadership – either from within or outside. But then this is easier said than done since their current political and religious leaders are the real culprits who connive to keep their flock uneducated, seeped in poverty, bound to irrelevant religious dogmas and brainwashed to mistrust Hindus and anything to do with Hinduism. This ensures isolation from main stream India and alienation from majority Hindu community which helps the community leadership to exploit the poor people. Just for the record, in Gujarat BJP has made a very deliberate effort to induct Muslim in its fold from the grass root level and today at the municipal levels there is a sizeable number of Muslim candidates in various constituencies in the state. Unfortunately in UP BJP has had no such opportunity since it has not been in power for over two decades.

When Muslim leaders like Mr Owaisi of AIMIM, Mr Azam Khan of SP and others talk of lack representation of Muslims in all walks of life from government jobs to military to politics, they must first introspect and see what they have done for their community – or more importantly what they have not done. Instead of beating their chest at an obscure statement by a fringe politician or a small time Hindu activist they should give credence to what more senior leaders of BJP say and do. It is time these politicians and community leaders move on from playing the victimisation card and take initiatives to develop camaraderie and bonhomie among communities instead of increasing the divide. History tells us clearly that communal riots are never one sided and the end result is always disastrous for either side. It is irrelevant which side suffers more since it is relative and of little importance in the final analysis.

Political parties work on the principle of win ability in selection of candidates barring a few exceptions where family or personal equations may come into play. Today BJP’s task is more difficult since it is pitted against the combined might of all other opposition parties. Thus win ability criteria becomes even more important for BJP. This is not a time for the party to experiment or to give tickets to Muslim candidates for the sake of appearing secular. The fact that it should induct more Muslims in its ranks at all levels is not disputable. But for that to happen it has to first succeed in forming a government, deliver good governance and win confidence of people. Once that happens there will be an inevitable drift of Muslims to the party. Hopefully with time more enlightened Muslim leadership will emerge that will work with BJP or other parties or form their own with just one agenda – the good of Mother India.