Given the disproportionate numbers of dhakka starts amongst our promising demographic dividend, it is only natural that repeated and regular ‘capacity building’ and ‘skilling’ and exposure visits abroad for our periodically relapsing netas, big and small, the elite bureaucracy and now even judges, be organised at public expense.

It was a common enough method to get stubborn Tata trucks and Mahindra jeeps of yore, started. Even with fancier cars. Rarely was there a dearth of ‘volunteers’ with passers’ by willingly joining in the effort. Perhaps, it is some sort of fun; the ‘pushers’ vigourously dusting their hands, satisfied and the driver beaming as soon as the dead engine spluttered to life. “Must get the battery checked”, he would murmur; slam the brake and step on the accelerator in neutral gear. Vrrrooomm…..!

Remembering numerous such tamashaas as we trudged to school along Shimla’s Cart road, holding breath and making faces to escape the acrid fumes from dhakka start cars, it got me thinking (much later) of the many parallel dhakka starts required or needed on fellow men (and women) in all nooks and crannies of life.

In childhood, there were always some regular dhakka starts in the mohallah or in school. Generally, they were fun especially those who felt a sort of satisfaction at being a dhakka start. Tidda (grasshopper) as we were fond of calling him, was one helluva dhakka start. He had this natural grin and beady eyes, but would seldom react to happenings around him, much like President Obama these days. He would stand with folded arms in his long, striped pyjama, grinning but not really grinning, only to suddenly jump when all of us shouted, “Tiddae ball ko rok”! But Tidda would normally jump away from the ball and then belatedly chase it in leaps and bounds (hence grasshopper), never really getting to it. A slap across his back would get him momentarily enthused but he soon relapsed into his usual standing position, arms folded and grinning.

As we grew older, the number of dhakka starts seemed to multiply, though with more and varied traits. A kind of camouflage; a pretence to befool and hide incompetence, plain laziness or inherent sloth. ‘Laidback’ was often a culturally appropriate or confused explanation offered. Not that all dhakka starts had slow chemistry. Some were too clever by half and had adapted to being phoney dhakka starts in a world where honest labour is seldom well rewarded.

The cult of dhakka starts became more obvious in government offices. Out of ten people in an office, half or more would be dhakka starts in various stages of mastering the ‘art’. The timid few would sometimes, in the beginning, respond to shouting or ‘warnings’ from the boss, but those more advanced dodgers would tenaciously contest why almost everything cannot be done! Perhaps they were secure in the experience that the boss was never really in a position to deliver a ‘dhakka’ that could upset them to actually work. How the genuine dhakka starts got the job in the first place and subsequent promotions to levels to head whole sections of their cohorts, remains a bureaucratic enigma and cause of much heart-burn to non-dhakka starts.

Dhakka starting is perhaps most used when inculcating public speaking skills in students, teachers, aspiring but stricken actors, reluctant pradhans and others generally petrified with stage fright. Many have learnt swimming very quickly due to well-executed dhakkas by their mentors. So also, divers and parachutists and hang gliders and bungee jumpers; most needed a good dhakka start to begin with.

The recent De-Mo is a good example of trying to dhakka start floundering fights on many fronts, intended or fortuitous. Black money will be money no more and all those stashed away Big-De notes overnight turned into just paper, except for political parties and big fish. Digital India is said to have got a big unintended boost as one can now buy even aloo-pyajj through PayTM. Never mind the clueless queues at ATMs and banks. Economic resurgence requires that, despite short run dips in the GDP, our fellow countrymen and women, stoically endure (as they are historically tuned to) known and unknown De-Mo dhakkas including getting used to the idea of banking. So Mr Modi would have us believe. But such dhakka starts too, extract collateral damage, like from bombing people to usher in Peace.

Given the disproportionate numbers of dhakka starts amongst our promising demographic dividend, it is only natural that repeated and regular ‘capacity building’ and ‘skilling’ and exposure visits abroad for our periodically relapsing netas, big and small, the elite bureaucracy and now even judges, be organised at public expense. After all we are serious (and quite fed up) of these fellows needing a dhakka start whenever a job needs to get done! 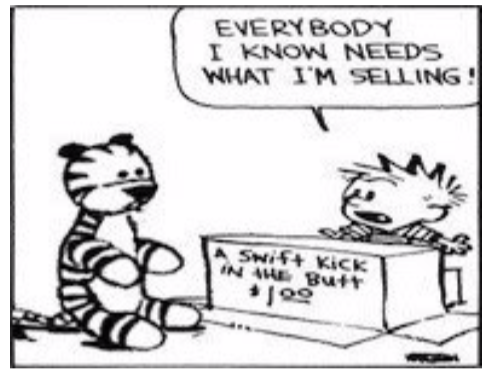 One wonders though whether the age old “kick in the butt” would still be the best dhakka start, were it administered more often? Government would save a lot of money by subsidising this tried and tested medicine!