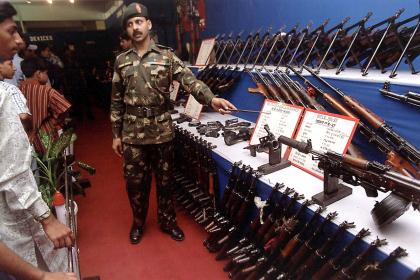 Jammu: The Jammu and Kashmir state police and army troops in a joint operation unearthed a large cache of arms and ammunition from a location close to the Line of Control (LoC) with Pakistan in Poonch district yesterday evening.

A defence spokesman in Jammu said the cache was a “war-like store”.

“Based on specific intelligence inputs about cache, a joint search operation was launched by the army and Jammu and Kashmir Police in Sabra Nala of Mendhar, Poonch district , Saturday afternoon,” the spokesman said. The area is 230 km northwest of Jammu.

By evening, security forces recovered a war-like store from a hideout.

The spokesman described the recovery as “a major blow to efforts of revival of terrorism in the state.”