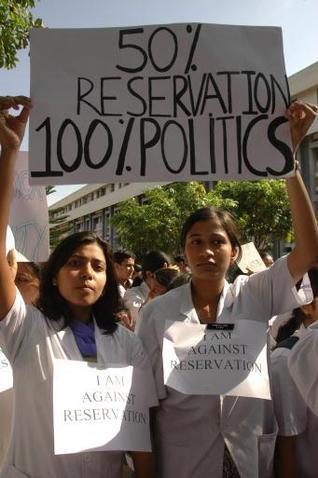 In the slack monsoon session of the parliament this year, among the bills that were tabled due to the disagreements between BJP and UPA about the Coalgate scam, was the ST/SC Jobs Promotion Quota Bill. The ST/SC Jobs Promotion Quota Bill was introduced in the Parliament after the Union Cabinet proposed to amend Article 16(4) of the Constitution of India.

The proposed Article to be amended allowed States to make provisions for the reservation of appointments or posts in favor of any backward class of citizens which the State believed were inadequately represented. However, the amendment did not intent to limit such provisions but to remove the term “inadequate representation” to justify reservation in promotions and appointments. This was done in order to circumvent the Supreme Court’s verdict opposing reservation benefits for SCs and STs in promotions that the then Mayawati government in Uttar Pradesh had proposed.

Barring the Samajvadi Party (SP), all parties were found to be in favor of its passage, and if the monsoon sessions had not been disrupted repeatedly, the bill might have been passed. Samajvadi Party’s reason for opposing the bill was not that they found it unjust or lacking in merit, but because they insisted that the benefits should extend to the large heterogeneous group of quota favored classes, recognized as ‘Other Backward Classes’ (OBC).

After independence, when the Constitution of India was being framed, Article 15 (4) proclaimed: “All citizens shall have equal opportunities of receiving education. Nothing herein contained shall preclude the State from providing special facilities for educationally backward sections of the population.”

Moreover it said “The State shall promote with special care the educational and economic interests of the weaker sections of society (in particular, of the scheduled castes and aboriginal tribes), and shall protect them from social injustice and all forms of exploitation.”

Then Mandal Commission came up with another ‘revelation’ that after 40 years of Independence, the OBC’s are still not at par with the upper caste population of India. The recommendation of reservations for OBC’s in government services was implemented in 1993. The recommendation of reservations in higher educational institutes was implemented in 2008.

Over the years there have been many clashes between communities from non-reservation categories and reservation categories over the percentage of seats and jobs to be given to the said ‘weaker sections’ and whether reservation should exist at all. The core premise of the debate has always been that due to reservation a more deserving candidate would lose the seat to a lower scoring reserved category applicant.

However, reservation continues to be a necessity to provide a fair chance for those who come from underprivileged backgrounds and their right to work and study on a platform equaling those from privileges goes undisputed. 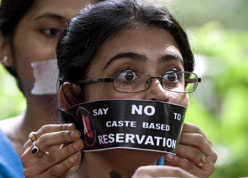 The more pertinent issue of concern remains that reservations today have come to be more of an inheritance rather than a road of progress. A child born with a schedule caste and schedule tribe or other backward class classified surname is from birth entitled to the privilege of reservations.

The family in question may no longer be backward and might have progressed to be part of India’s elite, but despite that reservation laws classify such a child as underprivileged. The basis of this law is to provide all citizens with ‘equal opportunity’ and for those from a privileged background, availing of such a facility mainly on the basis of a surname seems bias.

Moreover, the reservations can be used by multiple generations of the same family. That being the case a student can continue to proclaim ‘unfair disadvantage’ over other applicants and an adult for a ST/SC/OBC reserved job, even though their ancestors have experienced the benefits of the reservation.

This brings about an ambiguity that after ones’ ancestors have used the law to their benefit and already been provided ‘equal opportunity’ how does another younger member from the same family claim that they are still underprivileged.

After all, the debate which put the laws governing reservation in place said that the ancestors of few classes had an advantage over ancestors of the others and thus the children of the previous type lead richer lives. Thus, by usurping the privileges of the law repeatedly through many generations, the class renders the initial debate for the law to be put in place redundant.

As the law was drafted to be revised after a period of 5 years, it could have worked well for the overall upliftment of our society. However, today as the reservations continue, it becomes the responsibility of those in governance to reconsider the structure of these laws. While it might be imperative to put new laws into place to benefit those who are underprivileged, the urgency to rethink the laws already in existence is far greater.