Shimla: In the wake of recent tensions between the party government and party organisation and its senior leadership the Himachal Chief Minister Virbhadra Singh met the Congress Vice President Rahul Gandhi in his residence in New Delhi on Saturday. The two leaders discussed the political scenario in the hill State including the current strains and factionalism in Congress and aggressive attitude of the opposition that has already geared up for the polls after the Prime Minister’s successful rally at Mandi earlier this week.

Though the Chief Minister’s faction is claiming that it was a routine meeting and Mr. Singh has invited the Congress Vice President for the party’s rally on December 25 in Kangra on the completion of its four years in government but the opposing faction led by the PCC chief Sukhwinder Singh disclosed that the Chief Minister was summoned by the AICC and the issue of alternate leadership was discussed in the backdrop of corruption charges against Mr. Singh. 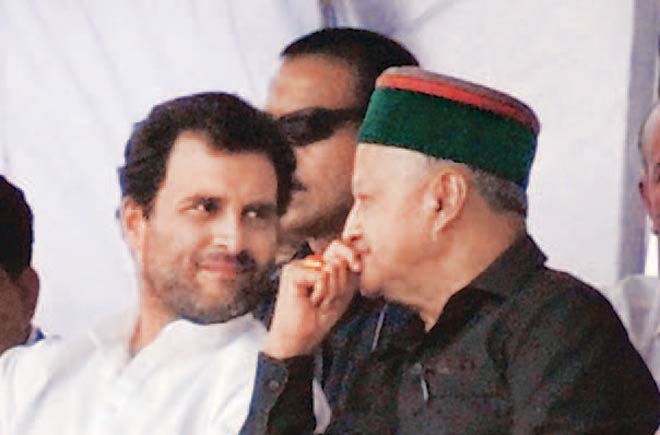 The Chief Minister is believed to have demanded the removal of PCC chief from his post and he is being squarely blamed for the factionalism in the party. The State party president who has refused to succumb before the octogenarian Chief Minister has already demanded the organisation’s say in the distribution of party tickets for the coming Vidhan Sabha elections next year. He has been promoting the youth against the ageing first line leadership in the party and has always talked of a fresh vision for the State. Mr. Singh had first come to the State in 1983 as the Chief Minister and had since then not allowed any other face to come up or challenge him within the party despite his failing health and registration of numerous corruption cases against him, allege the majority younger leaders within the party.

The party’s second line leadership has now started challenging him and his long time authority after he has started promoting his son and has made him as the State Youth Congress president. His wife was also the Loksabha MP from Mandi but was defeated last time by a political greenhorn in the Modi wave.

However the neutral political observers here feel the week Congress high command has no option but to toe the line of Chief Minister who still has a no formidable challenge from any other leader within the party. The hill State is now one of the few Congress governments left in the country.