With the suicide of Naga Baba, the case of the missing US trekkers has become more complicated

Kullu : Suspected for being involved in American trekker Justin Alexander Shelter going missing in Manikaran valley on 24th August,2016, a Naga sadhu Satya Narayan Rawat, said to be from Nepal, committed suicide at a Kullu police lockup at around mid-night on the Friday-Saturday intervening night.

The sadhu was arrested on 15th October over allegations of having a role in the 35 year old trekker suddenly going missing as he was one of last persons to have been with Justin Shelter, before he disappeared near Mantalai Lake / Kheer Ganga, in Mankaran valley, a remote region of Kullu. The sadhu (also called Baba) was to be in police lock-up for investigations till October 24.

Making a public disclosure about the Baba’s suicide, Padam Chand, superintendent police Kullu said here today, “the Baba was a suspect as our investigations found that during Justin’s journey to Kheergnga, he was with the Baba and a porter named Anil. They were all together till they were on their way back, when suddenly Justin went missing.”

A post mortem with videography of the custodial death was done under supervision of the chief judicial magistrate of Kullu and an judicial investigation has been initiated into the suicide case.

With the suicide of Satya Narayan Rawat, the case of the missing US trekkers has become more complicated.

Earlier C Susanne Reeb, mother of Justin Shelter who had flown down from Lake Oswego, USA, had lodged a police complaint about him going missing and had expressed her strong suspicion about the Naga Baba having a hand in her son’s sudden disappearance near Mantalai.

Susanne Reeb and Jonathan Sleeks, a family friend for UK had even hired a private helicopter to undertake search operations. The duo had approached the Himachal Pradesh government, where chief minister Virbhadra Singh during the Dusherra Festival of Kullu also had provided the state helicopter for carrying out the search operation. 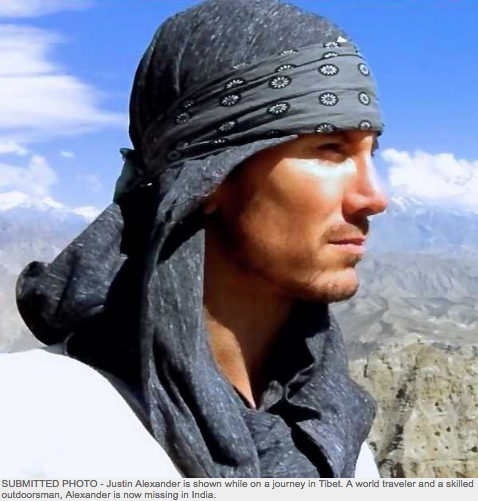 According to Portland Tribune, Justin Alexander Shelter is a highly skilled outdoorsman, mountaineer, survivalist and a martial arts expert.

“Because of his work, Justin had a worldwide global network,” Reeb says, and many of those friends — including a young man whose life was saved by Alexander are now involved in a search-and-rescue effort. There are even a couple of celebrities involved: best-selling author Tom Brown

Reeb says her efforts to get help from the U.S. government have so far been highly disappointing. “The U.S. Embassy has just brushed me off,” she says. “They were not very nice. They pushed me around.”

Reeb says the last time she talked to her son was on Aug. 20, when he called from India to tell her about his journey in the Parvati Valley, which is located in the Kullu district of Himachal Pradesh. He said he was accompanying a Hindu holy man on a spiritual pilgrimage. The journey, he told his mother, had proven to be full of hardships, including hunger and physical suffering.

“He was done with this experience,” Reeb says. “He was leaving early. He hadn’t eaten in days and his back was hurting. He was hiking back to his guest house.”

The only other details about Alexander’s experience have come from two trekkers he encountered Sept. 3 on the way back to his home base, where he kept a motorcycle and video equipment. The two men gave food to Alexander and said he told them he was only two or three days away from his lodgings.

After that, there has been no more word of Alexander.

“I just want him found. I want him safe. I don’t want this to happen to anyone else,” says Susanne Reeb.