The world of animals and humans are quiet segregated from each other, seldom crossing paths. But what happens when they encounter each other under imposed settings such as zoos?

Both are left forever changed. No wonder in 2011, in Ohio, USA, a 62 year old zoo owner, Terry Thompson, who loved his exotic animals dearly, one day divested of his own illusions, left their cages open and committed suicide.

Zoos anywhere in the world are mired in conflict, and defamed for being cruel towards animals.

When applied, common sense manifests that no amount of love and care can replace the agony of animals, living inside barred enclosures. The animals perhaps lose their identities for amusing a superior species, the humans.

In essence, zoos no longer serve their primitive purpose of educating general public and re-creation. In the age of internet, wildlife education can be imparted through videos and other forms of graphics. And with better means of re-creation available, most people abhor the concept of watching animals inside cages.

The BIG questions then is – Why do zoos still exist?

We got into conversation with Dr. Sandeep Rattan, Associate Director, Wildlife Wing, HPFD (Himachal Pradesh Forest Department), who shared with us his valuable expert insights. We share here some of the most relevant excerpts from our conversation:

Why in the modern age of the internet, do zoos still exist?

Yes, the internet has eliminated the conventional purpose of a zoo. However, in the past as well as in the present, zoos continue to shoulder two major responsibilities tells Sandeep:

First, zoos are custodians of endangered species and second, through global and local conglomerates, they preserve insurance stocks of animals in case a natural catastrophe or epidemic strikes the animal world. 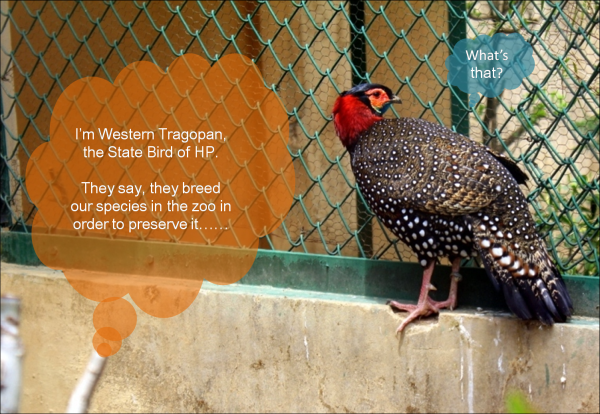 Here he points out an example:

The Bird flu outbreak in 2010 could have endangered so many rare species of birds, including the Western Tragopan(Himachal’s state bird), Monal and other rare pheasants, threatening their extinction. But, because we are breeding these birds in protected areas and zoos, it creates an insurance (Buffer) against their extinction in the event of a natural disaster or epidemic. The same is the case for other rare species of birds and mammals.

Caging animals has always amounted to cruelty – why then are animals still brought to the zoos?

Giving example of the Kufri Zoo, he tells us:

“Animals in Kufri zoo are a mix of rescue animals, animals that are bred in the zoo and animals from exchange programs.”

Rescue animals are animals that were initially brought to our rehab center in Tutikandi, Shimla, but because they could not recover from their injury fully or it took them longer to recuperate, they were shifted to the Kufri zoo. According to guidelines set by the Central Zoo Authority of India, the health status of each animal is thoroughly examined before releasing them back into the wild. Only animals that cannot survive on their own are then shifted to zoos, where they live under human protection. 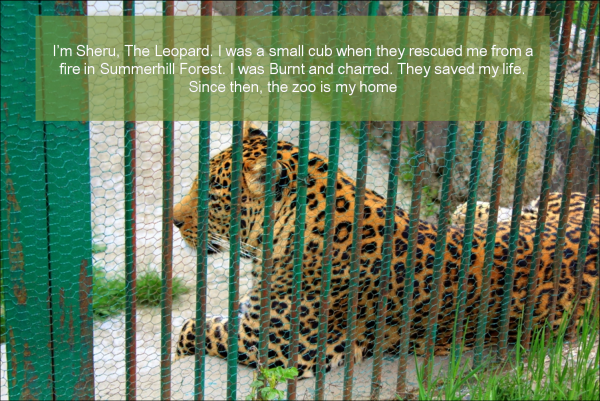 Forest Guard, tell us that

“Before the Kufri zoo came into existence in 1992, it was a musk deer breeding farm. Today also, we breed brown and black bears, and a number of endangered and rare species of birds and pheasants.” 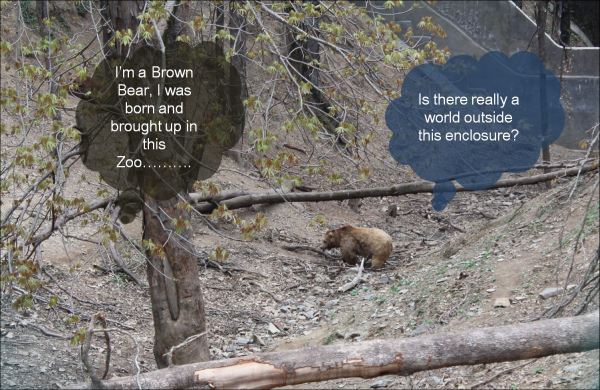 Lastly, since all the zoos are regulated by the Central Zoo Authority, whenever there is surplus stock of animals in a zoo, they are shifted to other centers. Shifting is also done in order to breed rare animals, such as the Snow Leopard. We had a snow leopard, which was shifted here from Darjeeling, but it had to be sent back for breeding. 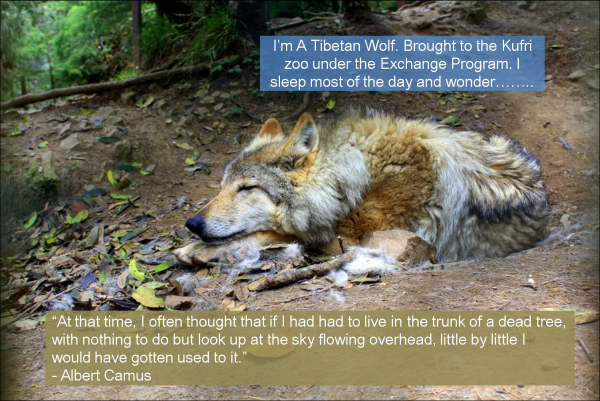 So, why aren’t animal offspring’s released into the wild?

The answer to this is a little complicated and requires in-depth understanding of the environment in which the young ones are born, reveals Sandeep.

The young ones of the animals are born under the care of humans, and because they are babies, they quickly adapt to the human ways and find their company reassuring. This happens especially with cubs of the bears. Moreover, their own parents, cannot rear them as they would have in the wild, so it becomes a very difficult for us to train them for the wilderness. There are special programs and strict guidelines for animal release, which require minimal contact with humans.

How does relation between animals and humans evolve under settings like zoos? How does human contact impact the animals?

The biggest downside of zoos, or rather any form of communication between animals and humans is how it impact the behavior of the former.

Human and animal interaction impacts the psychological, sociological, nutritional and visual behavior of the animals. With the passage of time, animals begin to depend upon humans for their daily requirements such food, cleaning, grooming and they also seek emotional comfort from the humans.

This phenomenon is termed as “Human Imprinting,” and it changes the animals forever.

The amount of dependency and comfort vary from species to species and also upon the amount of time the two spend with each other. And like it happens with humans, getting comfortable is easier, breaking free of habits is difficult, which also holds true for animals. 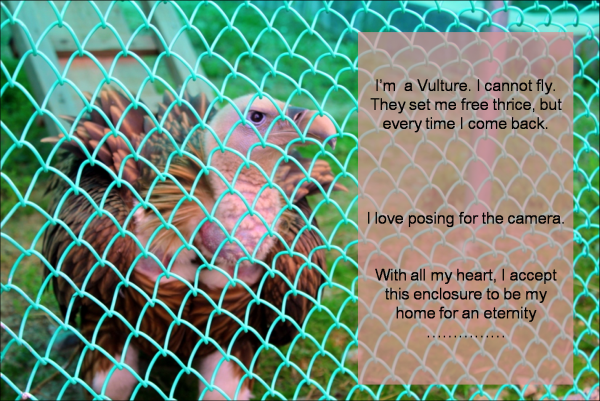 He supports his argument with an example:

“A leopard cub once escaped the animal rehab center in Tutikandi, Shimla, and was found next morning near Khalini. He sat comfortably in broad daylight in the middle of a crowded market, something not natural to wild animals. Perhaps, he had become so much accustomed to human presence around him that he was no longer threatened by their presence. On the contrary, people were not accustomed to seeing a leopard amusing himself in a crowded place, and panicked. If the leopard would not have been rescued on time, the incident could have turned serious.”

“This is one of the many examples of the kind of complexities that arise, once animals are brought in contact with humans.”

And, how are zoos acting as custodians of rare species as you have mentioned earlier?

With so many rare species of animals and birds on the verge of extinction, the humans, supposedly the most superior beings have taken it upon them to prevent extinction of some of these species. Governments across the globe are taking strict action against poaching of animals. They are promoting the creation of parks and sanctuaries.

But, above all, there are global and local conglomerates that ensure to maintain a certain number of rare animals and birds so that if their natural habitats pose any kind of threat in the future (like an epidemic outbreak), we are able to breed them and maintain their population. For this, governments not only exchange animals within the country, but also across the globe. And zoos, like parks and sanctuaries, are vital to the success of exchange programs.

What is the future of zoos in India?

The number of zoos in India is diminishing like anywhere else in the world. People are becoming more aware. Moreover, no new zoos are expected to come up because the procedure is so lengthy, no one is interested in the business.

But, on the other hand, India is one of the few countries around the world, which has a central authority managing the zoos. Unlike many developed countries where zoos are managed and taken care of by NGOS, in India it is looked after by the Central Zoo Authority, which is supported by Forest Departments in every state. NGOs can never generate and engage the same number of resources as we can. The Wildlife Preservation Act, 1972, lays down strict guidelines for animal protection and preservation. For instance, monkeys in zoos cannot have an enclosure less than 500 sq meters. Similarly, for leopards, it is 700 sq meters. Also, there are guidelines about which animal should be kept under what climatic conditions and so on…..

And coming back to the question

We are likely to see sanctuaries, national parks and protected areas emerging stronger in the future

And, so in conclusion, another mystery starts fogging in the head. While from the humans’ point of view and their obligations for preservation, humans should ideally continue to act as custodians of wildlife. But, what about the animals? Should they be made to live in cages, just for human accountability? Do they really require medical care from us?

When the most ferocious animals like the leopard lose their hunting instincts, and get corrupted by human ways inside cages, would preservation still be relevant?

Perhaps, the answer is not so simple……….