Make in India has been one of our Prime Minister’s favourite slogans. It seems to have caught the fancy of many but despite the BJP government being in power for nearly one year, the concept of Make in India seems to be going nowhere apart from featuring in political rhetoric from time to time. 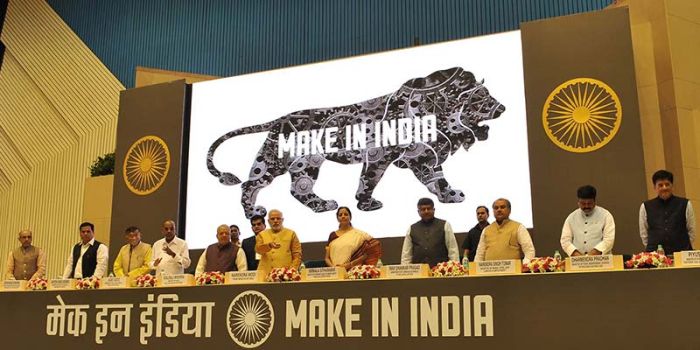 Is Make in India about making war planes, ships, rockets and nuclear plants in India? Or is it about making products to address the everyday needs of the people in the country? Whatever it is the slogan Make in India does have a good ring about it and comes with a feel good factor. It comes with a message that implies a revolution in manufacturing within the country. It gives hope of generating millions of jobs within the nation. It is about generating massive additional revenues for national exchequer.

It inherently implies an efficient and helpful administration that facilitates growth of industry. It gives assurance for a better future, more prosperity and raised standards of living for our millions of people who still live in poverty. Make in India cannot be just a slogan, it has to transform into Karma for the government and the nation to be successful. To be successful Make in India has to touch every Indian in some form or the other.

The moot question is how the government goes about making it a success. Is it by focussing on setting up of large high technology ventures that meet the specialised needs of the nation? Or should the focus be on mass production of low technology day to day use items? Ideally it would be a mix of both. However the former would be a few ventures as compared to the large numbers of ventures for the latter. The Make in India Revolution would be more conducive to the latter category when we have hundreds of thousands of micro, small and medium ventures in low technology areas dotting the country. These do not require any foreign expertise or external capital. All they require is a very simple straight forward policy from the government supported by a business friendly administration. These ventures, barring a few exceptions, do not have constraints of location. These do not require highly educated or trained manpower.

The power requirements per unit are manageable. The target markets for finished products are in close vicinity most of the times. Above all land requirements are small. If such a scenario can be put in place the final results would be phenomenal. Jobs would be created in millions across the nation. Bulk of the people employed would invariably be from the weaker sections of the society. More and more jobs will be available within the vicinity of towns and villages where people normally live which will help check migration to big cities. Per capita incomes will grow across the nation if the plan can be implemented well.

Most Indians would buy and use things Indian instead of being dependent on imports. If imports of routine low technology items are reduced drastically, outgo of foreign exchange on non essential imports will be reduced and that will release a lot of foreign exchange which can be put to better use elsewhere. Nation’s manufacturing sector will continue to be vibrant and this in the long run has a very special benefit. A few from among such ventures will invariably graduate to specialised and high technology areas over a period of time. Japan, Taiwan and South Korea achieved this in a big way. China too has had a fair amount of success in this regard. There is no reason why India will not do the same.

The point being made here is that as on date it is essential for Make in India to focus on low technology sector to address the basic needs of the people. Once an Indian uses Indian products in his daily life and can bank on made in India products for his normal life, there is no reason why selectively some, from among us, will not think of going beyond that to graduate to higher levels. This does not bar the government and larger business houses from thinking big and plan for setting up high technology based ventures to address the specialized needs of the nation apart from targeting export markets. Large and specialized projects need state of the art technology invariably that may or may not be available within the country.

There is a need to address the technology up gradation and availability issue. Ideally one would like to have it developed within the country. However it is not always possible to do that. Therefore this problem has to be approached in two ways. First we have to create an environment in the country where manufacturing is encouraged and that is where Make in India comes in. If manufacturing is encouraged, indigenous developments in technology will take place from time to time. Secondly in more urgent and highly specialised areas the government or large industrial houses may have to source from outside, albeit at a cost. In this case the trick is to assimilate the expensively sourced technology quickly and learn from the same so that the same could be proliferated for greater use in the country as a whole as far as possible. If this can be done, the initial high expense would be more than justified.

Today a plastic bucket costs about Rs 200 in the market. Nine out of ten users in the country would be using a bucket of Chinese origin. Therefore in all probability the bulk importer imports it in the country at about Rs 120. The difference of Rs 80 accounts for import duties and profit that is shared between the importer, wholesaler and the retailer. What does this imply? It shows that the Indian economy shared only Rs 80 out of the whole transaction of Rs 200. The transaction benefitted only a small chain of people starting from the importer to the retailer. If on the other hand the bucket was made in India, the Indian economy would have been the beneficiary of the total amount of Rs 200.

The profits at each stage would have been shared between a much longer chain starting from raw material vendor to the final retailer with the manufacturer of bucket in between. In fact the chain will not start with the raw material vendor since the raw material itself has to be manufactured. So the chain goes back much further to ensure value addition at different stages. Make in India has the potential to ensure that the beneficiary chain is long at all times. That is essentially the bed rock of Make in India and thereby its importance to the nation. This is how Make in India will touch nearly every Indian, from manufacturer to consumer, in some form or the other.

Over the last two to three decades India has allowed one of its inherent advantages to slip from its fingers and to be exploited by other nations. This is the vast consumer base that is available within the country. Why is it that today most consumer goods industry is dominated by foreign multi nationals? Some of these could not even succeed within their own country but have made up for that by capturing huge markets in India. In most cases the local value addition is very nominal. Why is that most daily use items in our homes across the country have a made in China tag today? Indeed one feels ashamed to think that even the figures of the deities in front of whom we pray are made in China today. For any consumer industry to sustain a large consumer base is a prerequisite.

India provides that and yet our consumer industry has shrunk drastically and today we have to depend on imports for a large part of our routine needs. The problem was not because we did not have entrepreneurs or good business brains. The reasons were more to do with poor policy structure, weak infrastructure, a corrupt and unresponsive administration and inefficient overall governance.

It is time the government of the day corrects these maladies and uses Make in India as a vehicle to usher in changes to bring vibrancy to manufacturing sector. Let Make in India be a slogan for every Indian and not just for a few corporate or business houses. Let ‘manufacturing’ be a very special and respected word. It is time we encouraged and rewarded our young engineers to dirty their hands on a shop floor instead of opting for an air-conditioned office environment once out of college. Just as roads and railways are the life lines of a huge nation like India, it is essential to make manufacturing the backbone of our economy.