Kullu: Murder of a middle aged man in Aani sub-division has sent shock waves in the region after this one being the second murder case reported in two days. Yesterday (8.4.2015), a woman working as a veterinary pharmacist was found strangled in her room at Aani.

Suresh Chauhan, deputy superintendent police, let Hill Post know that one Vinod (40) was found dead today by villagers near the villages of Ghatu and Kedas in Nirmand block.

“A case has been registered and the police have made one arrest in the case,” said Chauhan. 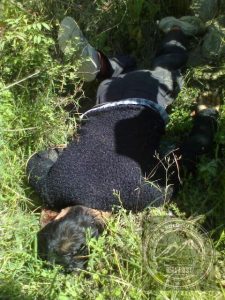 Vinod reported to be a native from Hamirpur was married to a local woman and was living in the area for more than 6 years.

Police sources said that Vinod was last reported to be with Bittu (28) and Prem (40) who are brothers. They were spotted together in a local market, where they consumed alcohol but on their way back home a drunken brawl is said to have taken place.

In the fight that ensued, the victim was brutally hit and is reported to have died because of the injuries caused.

Bittu a prime suspect in the Vinod murder case, said Chauhan, and he has been arrested.

Efforts are being made to arrest his accomplice in the case. Investigators have recovered a stick smeared with blood, which is suspected of having been used to hit the victim, said the police officer.