Kullu : A woman was found murdered  in her room at Kungash village in Aani sub division today (8.4.2015) morning. The police have registered a case and launched an investigation. No suspect has been arrested yet.

Vandana , a 32 year old woman, who was working as a veterinary pharmacist at Kungash village since 2013 was found dead in her room. Neighbours when they opened her door in the morning found her murdered on the bed. 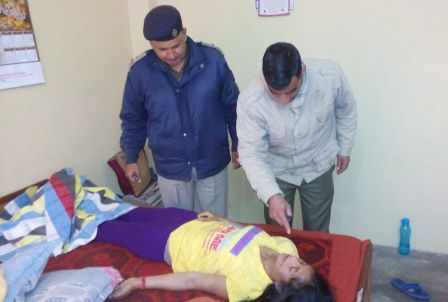 Eyewitnesses claimed that there were strangulation marks on the neck.

The victim was said to be having a strained relationship with her husband, who is a native of Haryana. Father of the victim said that his daughter often used to complain about her husband’s inhuman behavior towards her

Surender Verma, superintendent police for Kullu district let Hill Post know, “A case has been registered. The dead body has been sent to Indira Gandhi Medical college (IGMC), Shimla for a forensic postmortem after which exact cause of death could be known. ”

”Though we’ve constituted a team to investigate the case but presently it is not possible to reveal suspect’s name as it may hamper the investigation,” said Verma.