The cuckoo is the proverbial opportunist of the avian world. Too lazy to apply itself to any hard work, and lacking the confidence to create anything itself, it does not build its own nest but instead takes over nests built by other birds. It thrives on the labour of others. On the 16th of this month two more cuckoos have joined our political firmament, much to the disappointment of their supporters and erstwhile admirers.

Kiran Bedi and Shazia Ilmi had for some time been chirping the implied message that they were badly in need of nests to feather and that they could not wait any longer to find one. The political jungle is an unforgiving place and life can be hard if you don’t have a warm nest. And both these ladies were in a hurry: one had just lost two elections and needed to reassert her relevance; the other was 66 years old and was in grave danger of being forgotten by the news channels now that she could no longer piggy back on an old seer who had retreated to his distant village.

Ms. Bedi has always wanted to be the dominant leader but fate had denied her the opportunity to become one so far. In the IPS she could not make it to Commissioner of Police, Delhi. In the IAC she could at best be an advisor to Anna Hazare. Post Hazare she did not have the guts (or commitment) to plough the (then) lonely furrow that Kejriwal did and consequently could only glare from the margins as AAP became a force to reckon with. She did not build a nest of her own. 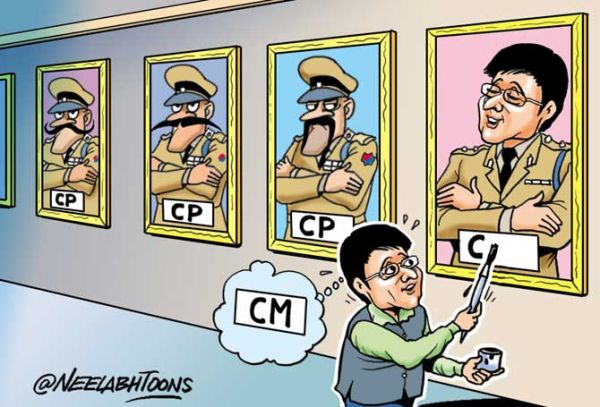 Ms Ilmi probably thought her looks and TV anchor background would keep her in the focus of attention within the AAP. To her credit it must be conceded that, unlike Ms. Bedi, she slogged it out on the streets and slums of Delhi both for IAC and AAP and won herself many admirers for her sheer gutsiness. But then she lost two elections. She probably realised one day that, with the Modi juggernaut rolling on relentlessly, it might be a long time before she could enjoy the fruits of her labours. Not prepared to wait any longer, she invented the “lack of democracy in the AAP” chestnut and walked out of the party. But she still needed a nest of her own. 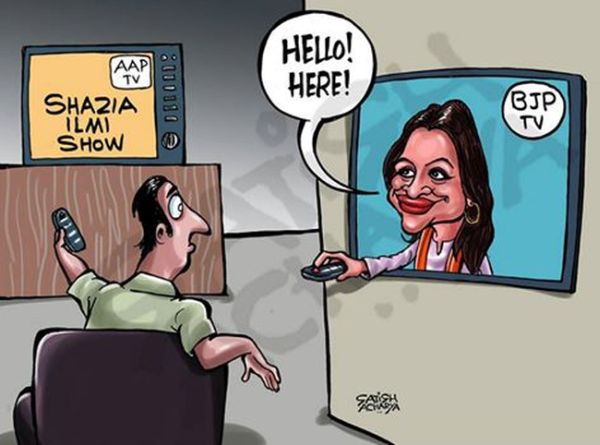 Their embracing the BJP at this crucial juncture is a betrayal of their supporters, and even more sadly, a betrayal of their own credo. How could they have done the chameleon act so blatantly? In May 2013 Ms. Bedi had grandly declared that “Neither (of the two main political parties-i.e Congress and BJP) deserves our vote. “. She had then gone on to attack Mr. Modi personally by predicting: “One day( NM) will have to respond with clarity about riot massacre.” Shazia Ilmi was no less critical. She constantly questioned the BJP’s funding process and even waxed poetical on 21st Nov. 2013 when she intoned: “Hypocrisy, thy name is BJP.” No wonder Anna Hazare is not taking their calls!

Their attempts to put a gloss of vindication on their back stabbing of an emerging civil society is pathetic at best and unscrupulous at worst. Sound bytes on TV cannot hide the ugly face of mercenary opportunism that is visible through their charade. They are, we are told, “inspired” by Mr. Modi’s leadership and “want to strengthen his hands”. Ms. Bedi even did a Galileo like performance when she trilled that Modi was the sun around which stars like her revolved! These hossannas to the Prime Minister are no doubt music to BJP ears but there is a discordance in them which needs to be pointed out.

The Anna Hazare campaign (which spawned the India Against Corruption movement, which brought these ladies to public notice in a big way) was never about performance or leadership or economic policies of governments. It was about corruption, transparency, sensitivity to civil society, communal harmony, accountability of political leaders. It was about cleansing the soul of Indian politics, of restoring to it an inner core of morality and ethics, of keeping at its centre the interests of the common man. Anna Hazare, Kejriwal, Bedi and Ilmi became the darlings of a new aspiring India because they espoused and struggled for these standard of behavior in politics and governments. 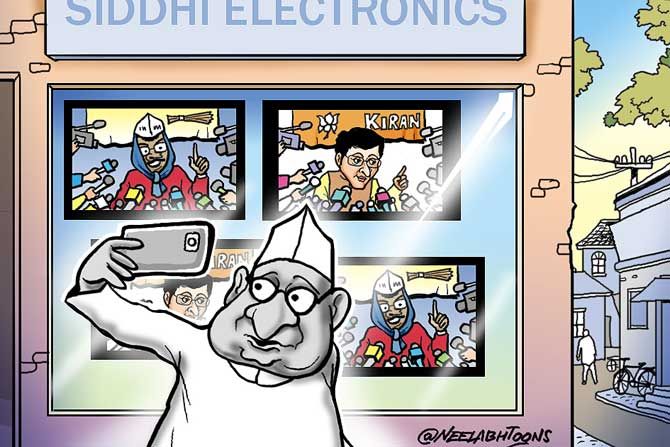 Kejriwal has continued this desperate struggle over the last two years: he has been mocked, derided, slapped; he has committed more than his share of mistakes, he has got derailed at times. But like the needle of a compass he has always returned to his true pole, refused to compromise with entrenched interests and held fast to his dream of an India based on “sattvas” not “tamas.” We expected people like Bedi and Ilmi to keep him company in this struggle but they have stabbed him in the back for a few pieces of silver. Given their backgrounds as genuine social activists what, we are entitled to ask, could have induced them to join a party that has forgotten about the LokPal Bill, that has prevented the RTI Act from being applied to political parties, that will do nothing to stop its cohorts from intimidating the minority communities?

They claim, with a hypocrisy that can escape nobody, that they want to “strengthen Mr. Modi’s hands”. Modi doesn’t need his hands strengthened, thank you.

The BJP government does not lack for decisiveness, or talent, or will, or ideas. What it lacks is an underpinning of ethical values, an accommodative and inclusive spirit, a sense of the diversity of this country, a genuine willingness to confront the monster of corruption, a feeling for the man on the street. These are precisely the attributes and values that Kejriwal, in his admittedly imperfect and inadequate manner, has been trying to inject into our venal political system. He has faltered at many points, but at least he has not given up the struggle or compromised on his core belief.

Ms. Bedi and Ilmi, on the other hand, have capitulated totally and jumped on to the gravy train. The tragedy is that, had they stood with Kejriwal and AAP on this and fought alongside him, they could have made a real change in the way politics is played out in India. By bringing the AAP to power in Delhi they would have made the BJP and Mr. Modi reconsider their dogmatic positions on many divisive issues and perhaps persuaded them to deliver a more value based government.

That chance is now gone. Ms. Bedi may yet become Chief Minister of Delhi and Ms. Ilmi may perhaps become head of some Board or Corporation. But they have lost their moral legitimacy and distinct stature and are now just two more politicians, two more opportunistic cuckoos looking for nests to jump into. And India is the poorer for it. To tweak those famous lines by an Urdu poet: