This morning I was quite surprised and taken aback while reading the Newspapers, which carried news about the alleged letter that was written by your good self to Shri Virbhadra Singh. Though initially I was enraged and extremely furious to have gone through the contents of the letter copy of which I sought from friends in the media, while pondering over the reasons that could have persuaded you to write such an invidious letter a lot a different thoughts crossed my mind and the initial disgust and annoyance turned into a deep sense of pity and compassion for your good self and helped me to forbear my anger.

Having had a not so fruitful stint in Public life and the initial grudge you held against Raja Sahib for not being elevated to the post of Cabinet Minister during your tenure as Minister of State for Health in the Congress Regime and subsequent defeat in the assembly polls in 1998 by Shri Hari Narayan Saini a political novice must have crushed your inflated ego to a large extend. Making another failed attempt in the form of your wife Smt Sukriti Kumari as the Congress Candidate in 2003 Assembly elections riding high on the anti-incumbency of Dhumal Government and the all out support of the then Chief Minister of Punjab Shri Amrinder Singh failed to cut much ice with your former constituents owing to your reputation in the constituency. Whereas the Congress under the leadership of Shri Virbhadra Singh won absolute majority in the legislative assembly and he went on to become Chief Minister for a record fourth time. This humiliation combined with your covet Chief Ministerial ambitions not being fulfilled for which one needs to win elections in the first place and have to have backing of substantial no of Members of Legislative Assembly, sadly you lacked both. Having to see another former royal being back at the helm of affairs must have been a definite cause of heartburn, and I personally sympathize with you for that. 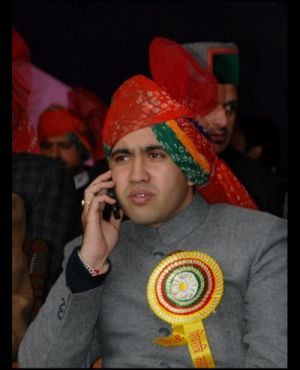 Other than your political front, which by far has been abysmal I am told your personal life has been equally distraught. (—————-Edited————–)

While going through the letter you have written I was rather amused to read about your disillusionment with Section 118 of the State Land Reforms and ceiling Act which was especially enacted to save the interest of people of the state, and has over the years benefitted lakhs of Himachali’s, which was even hailed by the opposition in the past at a number of occasions. As far as the investments in the state are concerned let me take the opportunity of briefing you that just recently the Chief Minister with his entire team went on an Investment Summit to Mumbai, Ahmadabad and Bangalore and shared dais with representatives of leading MNC’s and just a week back the State Cabinet has cleared Investments worth 4500 Crores that will on the one hand benefit the State’s economy and on the other hand it will create employment opportunities for Lakhs of unemployed youth of the state , who have previously benefitted from the Skill Development Allowance serving upto 60 thousand Youth of the State.

Other than the so called interest of Himachali’s, on whose behalf you have written this letter, the timing and intent of your letter is very much questionable and hard to believe.

As far as the Development of the State and the reputation of the Chief Minister is concerned which you said ‘’is Hanging by the thread’’ I would very humbly and with all reverence like to submit that no one has asked you for your unsolicited and uncalled advice, and as far as the people of the state are concerned they have their respective MP’s and MLA’s to speak for them so you can keep your advice to yourself, or rather give it to members of your family who require it the most.

The people of the state have elected Shri Virbhadra Singh as the Chief Minister of the state for a record Sixth Term and I am sure that they must have seen some merit in his governance to shower so much of their love and blessings. The Congress President and Vice President are firmly behind all their party Men and leader and so is the case with Shri Virbhadra Singh who is no exception. Let me refresh your memory that on the eve of elections in Himachal Pradesh it was with the blessings of Smt Sonia Gandhi that Shri Virbhadra Singh was made the Pradesh Congress Committee President and under his leadership the Congress Party was able to win a majority in the Vidhan Sabha.

Had you written this letter only for the recipient I would have still understood your grievances but sending a copy of the same to the Media and Members of the opposition very clearly shows your mala fide intent?

I wish you a very good health and will pray to God with all dedication that you achieve whatever you desire for rightfully.