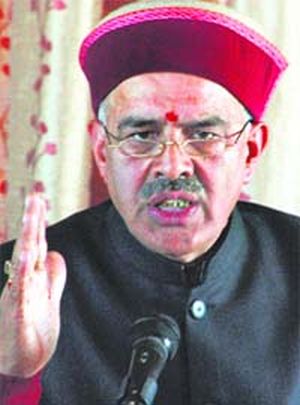 Spokesman of BJP Mr. Gansesh Dutt said that Mr.Singh rule was deceiving youth in the state on name of employment allowance as it already took u-turn after not fulfilling its most rhetoric election promise made in 2012 assembly elections.

“The youth of this state were feeling most neglected under Mr.Singh rule as it deceived them not fulfilled the promise made during elections moreover it changed the name of scheme to skill development allowance (entirely funded by the centre unbundled by the new BJP rule ).”

Chief Minister almost completed two years in the office today did not deserve to slap any charge sheet by opposition as people of this hill state are ready to convict it inevitable from congress clean sweep of congress in recent Lok Sabha election in the state, BJP alleged.

“ In media statement Mr.Singh had been accused own functionary for some alleged ambiguity in the implementation of skill development scheme in the state should have to explain what action he took against those responsible “ Mr Dutt said.

“Why Congress garner votes in the name of employment allowance could not deprive more than 12 lakh youths from this benefit who are registered under various employment centre in the state” BJP.

BJP this time had decided to not bring charge sheet against Mr. Singh rule as government had already exposed before the people likely to convict by them soon” BJP alleged.

He argued that if Congress rule is so confident on its performance why it was shying away from celebration of two years rule this time. It shows that Congress seemed accepted its own failure however it was trying to making false excuse as decided to postpone celebration on account of heavy snowfall in the state.

Transfer of government employees taken proportion of industry BJP alleged that fistful extra constitutional authority were running this trade who were charging Rs 30000 for transfer of employees and Rs one to two lakh for senior officers, Mr. Dutta said informed that party to expose them soon.

There are reports that under the garb of high functionary in the government fake bills were being prepared of some contractors in state departments however honest officers were being victimized for no fault.

The media reports are reveling the convince of top government functionary for green felling and mine mafia active in this hill state but no action has been taken by Mr. Singh rule to check this prevalent issue again trying to span after gap of 50 yrs.

There seems no coherence between government and party as Chief Minister was praising Narendra Kumar Modi rule for benevolent on this hill state on the other hand party president Sukhvinder Singh Sukhu was accusing it for starving the state form its due funds.

Congress, announced to give benefit of promotion to employees after the gap of 4, 9 and 14 yrs of services since 2006 in its election manifesto in 2012 assembly election, did not implement the decisions sofar, he added.