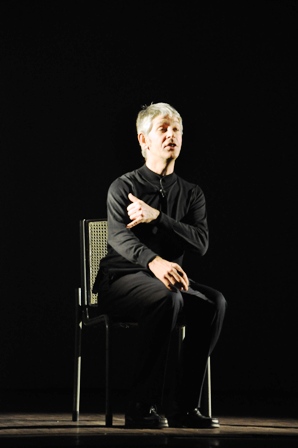 “It is beginning to change. A big change happened in London because of the (Aug-Sep 2012) Paralympics. People in London embraced the Paralympics more than they did the real Olympics,” Dawson, who was in the city to demonstrate his concept, told in an interview.

Dawson, 50, who has trained in dance, mime and theatre in London and Paris, as also in the US, has ventured off the beaten path of commercial theatre to sensitise others to the subtle differences of being abled and disabled and has presented over 20 case studies on stage – poignant representations of patients afflicted with cerebral palsy in the last five years.

“I use my body as a channel to show people, to make them understand what it’s like to have cerebral palsy and other such diseases and what they go through. Hopefully, people will have a better understanding,” Dawson explained.

According to Dawson, being abled or disabled depends on “how you function in the world”.

“We could probably have a debate on the topic. Since they don’t do things that appear to be normal they are labelled as being disabled. Some people with disability function very well, play the piano with their feet because they can’t with their hands. That doesn’t make them disabled, it means they can play the piano and I can’t.

“We are all disabled and abled in certain ways. There is a very subtle difference,” Dawson added.

Dawson’s initial purpose was to “express ideas in theatre without language”. Learning the Feldenkrais method – a somatic educational system designed by Israeli physicist Moshe Feldenkrais that aims to reduce pain or limitations in movement, to improve physical function by increasing students’ awareness of themselves – got him thinking about the differentially abled.

“Feldenkrais has nothing to do with theatre, but it helps to keep your body in good shape, which is needed in theatre. While thinking about the awareness of your own body through Feldenkrais, you start thinking about people who have disabilities or actual conditions and that’s how I met neurologist Jonathan Cole and we thought it would be interesting to look at the patients from an artist’s point of view,” said Dawson who has performed in the US, Canada and various European countries.

For the last five years, he has been painstakingly putting together acts incorporating mime movements, hand model techniques and theatre performances after extensive interaction with the patients.

“Hand model performance uses detailed movements of hands and arms, but I am not just using my hands but all of me through mime and theatre too. It’s like a cross between a lecture and a drama. I talk to you, show you a little film, perform a little something, but all of it represents being half of what we are,” Dawson said.

His performances, aided by pre-recorded voiceovers from the patients, paint an intricate picture of how they go about their day-to-day activities.

“I interact with them. Just talk a lot. Observe a lot – how they do regular stuff, eat and drink and then put together that on stage, being very careful that it doesn’t end up being a mockery. I make sure they get to see what I have put together in the final stage act,” Dawson explained.

From mainstream theatre to “making a difference” for the patients, Dawson feels it helps him to know himself better.

“I do it because I don’t really understand myself. It is a realisation of the self, of how extraordinary it is to be anything at all, how extraordinary is it to walk and talk,” Dawson elaborated on his second visit to India for a performance at a programme to create awareness on mental ability, an initiative of The Wellcome Trust/DBT India Alliance.

Another thing he finds extraordinary is the special relationship Indians have with spaces and their surroundings.

“People squat on the floor here. They sleep on it, whereas in the West this doesn’t exist. Indians are very aware of spaces like walls and floors and aware of their own movements. It’s fascinating,” said Dawson who also trained in Indian classical dance form as a teenager.