New Delhi  (IANS) The Bharatiya Janata Party (BJP) said today the government should take “tough” decisions against Pakistan for killing two Indian soldiers along the Line of Control in (LOC) Jammu and Kashmir – but lamented this would not happen. 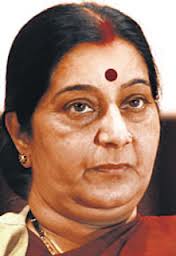 In her tweets, BJP leader Sushma Swaraj also said that the party will “support” the Congress-led United Progressive Alliance (UPA) government if it takes “tough” decisions against Pakistan.

“I spoke to National Security Adviser S.S. Menon yesterday. I told him to convey to the Prime Minister that what has happened on the LOC is unacceptable,” Sushma Swaraj tweeted.

In a brazen violation of the 2003 ceasefire, Pakistani troops shot dead and beheaded two Indian soldiers along the LoC in Jammu and Kashmir Jan 8, sparking a diplomatic row between the two nations.