Fast turning into an high accident prone state, bad roads and not driving errors is one of the prime reasons why so many of them are taking place in Himachal Pradesh and the state authorities have been unable to effectively improve road safety.

Due to road hazards even the most careful drivers can get into accidents. Driving safely on hazardous roads can be a challenge. Driving would be much safer if the roads are well planned and in a good state.

Have degenerated from a decent state highway till November 2008, before a World Bank funded road project for converting the 80 Km long Theog-Kotkhai-Hatkoti-Rohru road into a double lane one was started, driving on it today poses a threat to many seasoned drivers who take to it or are forced to take to it to reach their homes.

The Theog-Hatkoti road is one of the most important roads to the apple belt area and it carries about 70-80 per cent of state’s entire apple produce. But unfortunately the condition of the road is so pathetic that it is considered as one of the worst route in this hill state.

The bad condition of roads has forced the transporters to increase the freight, which has in turn affected the apple economy. During peak time of apple harvest season, traffic goes up from July to September.

The condition of the road worsens during apple season when heavy loaded trucks with apple boxes cause huge traffic jams and become a nuisance for the commuters. Instead of three hours it takes ten to twelve hours to complete the 80-km journey as traffic jams last for several hours. Besides, apple crop worth hundreds of crores of rupees cannot be safely transported to the markets in such bad road conditions.

Replete with deep pits and pot holes, this State Highway (No – 10) running between Shimla and Hatkoti, has led to many accidents. Strewn with more than one foot deep ditches, a ride on this road is resulting in jerking of knees for two-wheeler drivers and the risk of four wheelers toppling in these ditches runs high.

After every yard or so there are deep pits and potholes dangerous for vehicle driving and the dust cloud arousing from the unmetalled roads reduces visibility that has caused several fatal accidents.

Even though this is a state highway and main cause for large number of accidents leading to deaths, disc problems, spinal injuries and bone dislocation injuries, the government simply is not doing enough.

Due to the poor condition of roads in Shimla district more than 1,200 persons have lost their lives in road accidents in recent years. 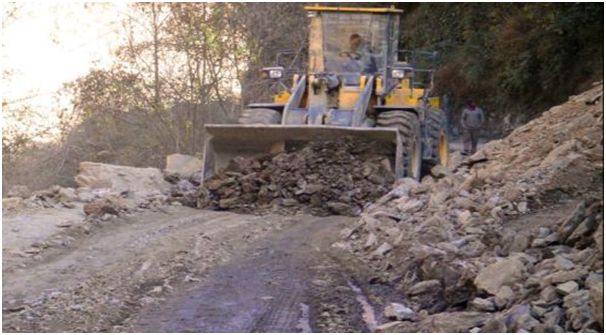 In order to improve the conditions of roads by strengthening and expanding the width of existing roads, efforts began more than 6 years ago in 2008, but the work of State Highway is still incomplete even though the World Bank through State Roads Project has funded  this project.

The contract for the 80.684 Km long Theog-Kotkhai-Hatkoti-Rohru Road, amounting to Rs 228.25 crore, was allotted to a Chinese company named Longjian Road and Bridge Ltd. Co. on February 29, 2008. Originally the road was to be completed within 36 months from the date of commencement.

However, the company could not accomplish it due to improper management and the work on the road came to an abrupt halt, leading to the termination of contract of the road project in 2012.

Crores has been sanctioned for upkeep of this road, but nothing is done till date due to lack of sincerity and negligence from the government. This is a government liability and should not be delayed due to any issues between the central and state government.

During an election rally at Kotkhai, chief minister Virbhadra Singh had promised to complete the road work in a specific period of time, but even after two years, it is still incomplete even though the project has been re-tendered.

There are many challenges that the states road network, especially in rural areas of Himachal, faces. Hill roads are narrow and the increasing number of vehicles have brought pressure on the limited driving space available on these roads.

Lack of basic infrastructure on roads like the side stockades and parapets have also resulted in many accidents. The deficiency of funds for repairing roads is the normal plea taken by the successive governments.

It is not only in rural areas, but in cities too the roads are in pathetic state. The landslides which keep occurring near lift and IGMC hospital is an example of the negligence by the concerned authorities.

Locals allege that the Public Works Department (PWD), the municipal corporation and the contractors do not pay heed to their safety while excavating hills in order to construct parking complexes or other buildings. The road along the parking lot near Chotta Shimla has also developed cracks.

On one hand the PWD is working towards the betterment of roads but on the other hand it is allotting work to contractors who are digging roads to lay down the so called 3G or 4G pipes which can further damage the roads and cause nuisance to the residents.

Local public is outraged by the negligence of the government authorities towards the bad condition of roads.

During monsoons and heavy winters, landslides are a common sight and commuters are stranded on many routes with their vehicles stuck in the mud. It is always the common man who suffers.

Roads are directly responsible for the economic growth of the country, therefore instead of neglecting this issue, work should resume at the earliest and immediate remedial measures should be taken by the government so that the roads are well laid out and strong.