Shimla: A soured road project approved after meticulous planning by World Bank executives five years ago, is not only two years behind schedule, but has cost apple growers dear and has opposing political parties here sparring over a blame game.

Fighting with his back to the wall, today it was Narinder Bragta, the horticulture minister and legislator representing Jubbal and Kothkai through which the broken down Theog-Hatkoti-Rohru road passes laying the blame on opposition Congress for the botched up Rs 228 Cr contract awarded to Chinese government backed Longjian Road and Bridge Company on 22 February, 2008.

“The road project deal with World Bank was struck by the Virbhadra Singh led Congress government before election time in 2007,” said Bragta.

With a change of guard in December 2007, cabinet of BJP chief minister Prem Kumar Dhumal approved awarding of the contract to the Chinese firm in February 2008 and even laid the foundation stone for the ambitious project on 15 November, 2008.

Giving the status report of the 81 Km Theog-Rohru road Bragta said, “it was slated to be completed by 4th June 2011. There have been delays. The construction company has sought an extension and now hopes to complete the road by 20th June, 2013.”

Under World Banks hawkish eye, the delays have gone unnoticed and a large population of Kothkai, Jubbal, Hatkoti and Rohru are trapped with a life threatening road not just for marketing agriculture produces but also for securing emergency medical aid.

Sources in Himachal Pradesh Public Works Department given the task of monitoring the road progress disclose, the project was unviable from the start as Longjian Road and Bridge Company through a global bidding process had bid extremely low to bag the Theog-Rohru road widening project. 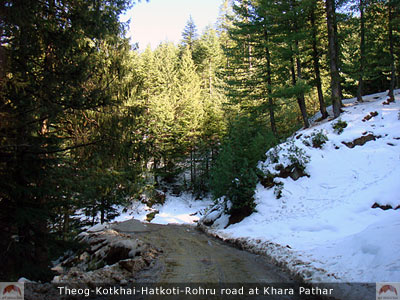 Attempt by the contract winning company to execute the project through Chinese workers was stalled by the union government which revoked business visas for what were essentially workers, engineers or management jobs on the project.

For the slow progress on the road Yaun, project manager of Longjian Company holds the state government responsible.

“We expected the project site to handed over to us free of encumbrances but when we started work, private land acquisition had not been done, forest clearances were not in place and even water and electricity lines running along the road alignment had not been changed,” he had let Hill Post know.

“It was only after the contract had been awarded that we realized,” says Bragta, “the shoddy work done by earlier Congress government in preparing the project proposal.”

“Final revised forest clearance approvals were only got in July 2011, and now work on the road has picked up,” he said.

Administrative and management hurdles aside, it is the largely apple growing community residing in the region that has borne the brunt.

“We incurred huge losses in 2010,” says Rajeev Chauhan, an orchard owner. “Delays in marketing the bumper crop because of road blocks, landslides and traffic jams, damaged and devalued the fruit and fetched diminished returns,” he added.

Bad road conditions have led to rise in accidents and vehicle breakdowns.

Sushma Chauhan, a nurse, and her husband Narinder survived a near fatal fall off the road on a May, 2011 afternoon as a cloud dust raised by traffic moving on the road reduced visibility thus much that Narinder at the wheels could not spot the road edge and the vehicle rolled 300 meters down the hillside before coming to a stop by a stream.

“If it was not for the help from some of the nearby villages who saw the vehicle hurling down the valley, we possibly would not have survived,” says Sushma who still suffers from shoulder pain that was shattered in the accident.

While Longjian Company is hoping to renegotiate cost escalations for the contract, the people of the area are resigned to having to live with a bad road.

“Both Congress and BJP sold us dreams of a 21st century road that would reduce travel time, boost tourism and economic activity but the fact is we are worse off than what we were before the much touted World Bank funded project started out,” says Anil Rajta a resident of Jubbal-Kothkai.

Hoping to allay fear of another bad year ahead on the road, Bragta said, “while the contracting company works on widening and road construction elsewhere, some of the bad road patches would be maintained by HPPWD this year so that movement of people and goods is not hindered as the earlier years.”

Apple fruit crop grows an Rs 1500 crore economy annually for the hill state and contributes significantly towards the state GDP. More than 50 percent of the apple crop comes out of the Jubbal-Kotkhai-Rohru belt that is served by a broken down road.

Besides 81 Km Theog-Rohru road, the Chinese government backed Longjian Road and Bridge Company was awarded also awarded the Rs 126.50 crore Mehtpur-Una-Amb 45 Km World Bank funded road project in 2008 but the construction company is behind schedule in executing both the contracts.

These projects are a part of the Phase I of the core road network improvement component of the World Bank funded HP State Road project.

The state government was expected to meet the balance amount of $ 83.43 million (Rs 375.435 crores).
With Himachal being given a special category state status, 90% of the loan amount of $ 220 million was to be made available to the state on a grant basis by the central government and the remaining 10 % as loan.