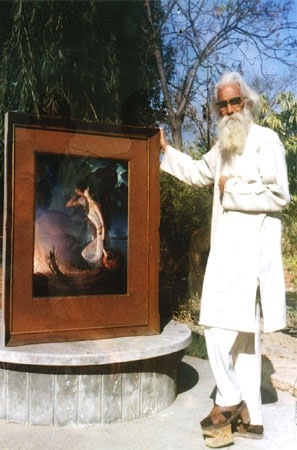 Shimla: Portraits of late Punjabi poet Amrita Pritam, Guru Teg Bahadur, and Lord Krishna made by celebrated artist Sobha Singh have been withering away in a Himachal Pradesh gallery.

But it has caught the attention of international experts who are coming to the Sobha Singh Museum in Andretta village near Palampur in Kangra Valley later this month to restore and preserve them.

Two art restorers from Britain will be visiting the museum to critically inspect and restore some of the works, said Hriday Paul Singh, general secretary of the Sobha Singh Memorial Art Society and in-charge of the museum.

Ian Barrand, a restorer who works at a prestigious museum in Yorkshire, and artist Bhajan Hunjan would assess and advice on what needs to be put in place for future longevity of Sobha Singh’s lifetime works, he added.

According to him, some cracks have appeared in six works which include the portraits of the late Amrita Pritam, a Gorkha soldier, paintings of Guru Teg Bahadur – the ninth Sikh guru, and Lord Krishna.

During their two-week stay, they will carry out some restoration work, he added.

Museum caretakers attributed high rainfall in the region for damage to the artefacts.

‘Excessive moisture and exposure to dust ate damaging the paintings,’ a caretaker said.

More than 50 classic paintings on various themes like national heroes and freedom fighters, religious figures, romantic tales, portraits and local folk are on display in the gallery, some 250 km from Shimla, where Sobha Singh spent 38 years.

Sobha Singh, who was conferred the Padma Shri in 1983, achieved acclaim for his strikingly beautiful paintings, particularly after he made the portrait of Guru Nanak Dev in 1969.