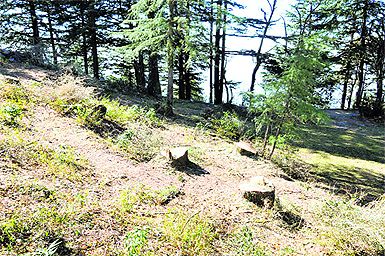 The accused is being interrogated by the police with hopes on him disclosing substantial leads. The Superintendent of Police D.W. Negi confirmed the reports of Amrik Singh having surrendered and of him being interrogated.

Amrik Singh, an hotelier by profession from Chandigarh, was interested in purchasing the land where the 477 trees were culled and had even paid 3 crore rupees as an advance for the land. Before he could finish up with all the legal formalities, the trees were cut and the original owner of the land, Parminder Kaur, denied any involvement. The police therefore centered its investigation with Amrik Singh as the prime accused.

The Police are hopeful of finding a breakthrough in the case soon enough with Amrik Sing in their custody. The hotelier is expected to make substantial disclosures regarding the case and reveal the names of people behind the whole episode.

The 38 bigha land was set to be sold for 16 crores to Amrik Singh who wanted to set up a tourist resort on the land. He had even made an advance payment for the land but 477 trees were cut down without any prior approval from the government agencies.  It is being reported that the day trees were cut down, on that very day the regular forest guard was on leave and the duty had been given additionally to another forest guard.  Amrik Singh is accused to be privy to this information and reportedly chose that very day to cut the trees as he knew there would be no one around to stop him.

So far 6 forest officials have been suspended for negligence of duties including the Divisional Forest Officer. Involvement of more government agencies and employees is not ruled out.