So we have come full circle again – the list of holders of foreign accounts which had been lying with the  government for three years and was given to the SIT four months ago has now been submitted to the Supreme Court and has been passed on to the SIT again yesterday. Hallelujah! The Chairman of the SIT has announced that their investigation into all the 700 accounts shall be completed by March 2015. Amen! Whether they will find even a cent in these accounts, now that their holders have had three years to move the moneys to anyone of 193 countries, is the next big thing to be debated on prime time television.

Actually, lets admit it. Indians love black money and treat with renewed respect and a sneaking admiration anyone raided by the Income Tax Department. We welcome, nay invite, Laxmi into our houses but prefer that she comes with hard cash rather than with a bank transfer or a draft. To fully understand this phenomenon, and the government’s convoluted strategy in the present case, we need to understand the Hindu view of wealth. 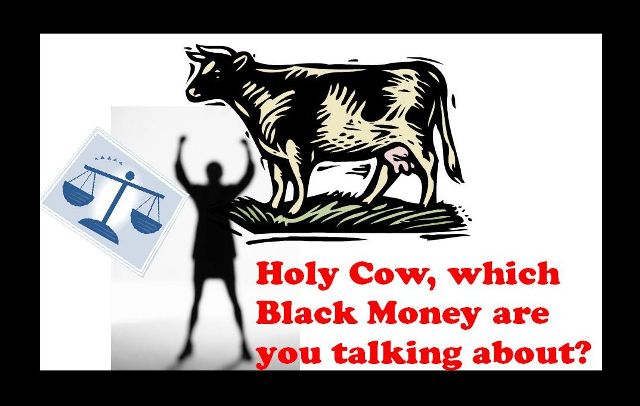 Nirad C Choudhury, that iconoclast of everything Indian, explains in his book ” Passage to England”. Hindus, he says, are devoted to wealth and to the hoarding of it because of their belief in reincarnation or rebirth. The devout Hindu reasons that since he will be coming back to this mortal coil at some future date, he may as well hoard his wealth to ensure a good life in his second innings. Nirad Babu is aware of the flaw in this argument – how can the person be sure that he will come back to the same family where the wealth has been hoarded? He answers this by contending that if all, or most, Hindus do the same thing, then statistically there are good chances of the new soul landing in a family with amassed wealth! To put it bluntly then, the Hindu is genetically and spiritually primed to hoard his moneys – black money, therefore, is something to aspire for and to respect.

Enter the government with its farcical attempts to recover this stockpile. To comprehend its PC Sorcar kind of moves we must first understand another facet of Hinduism – its rituals. Hinduism is all about ritualism, not substance. We can commit all manner of wrong doing-kill, cheat, beat, destroy, molest – provided we observe the right rituals: wash our sins in the Ganga, organise weekly havans, shave our hair, sing kirtans, feed portly Brahmins and so on. We garland the cow with many incantations and then let it starve to death on the streets. We feed widows in temples and then throw them out of our own houses. You get it? The ritual is everything. We are in no way interested in doing the right thing, we merely want that we should not be punished for doing the wrong thing.

This is precisely the kind of ritualism the central government (and dare we say, the Supreme Court?) is indulging in the matter of the Black Money. It signs treaties, obtains lists from foreign banks, sets up SITs, makes announcements about getting back the lucre in 100 days, promises investigations-and allows business to go on as usual. The business, of course, being the continued generation of black money in the country.

Forget the foreign accounts: there won’t be a farthing left in them by the time our sleuths get there. One report states that Rupees 14000 crore has already been moved out of Switzerland in the two years ending 2012. The obvious solution is staring the government in the face but it won’t even look at it: take immediate steps to stop the generation of black money within the country itself. Just three measures will ensure that 90% of the tap can be turned off.

First, tackle the real estate and property sector, the main generator of illegal and untaxed wealth. The devil here lies in the difference between the price actually paid for a transaction and the price at which it is registered, which is between half and one-third of the former: the difference is the black money. Today, anywhere in India, an all-white money sale is unheard of: if some idiot wants only white money for his property he will have to settle for a price far lower than its market value. All state governments have performed the mandatory ritual to counter this problem: they have fixed circle rates below which a property cannot be registered. The problem is, these rates are so far below the market rate they have no effect at all. In Greater Kailash of South Delhi the real rate is about Rs. 5-6 lakhs per square yard but the circle rate is about Rs. 2 lakhs. In the village where I betook myself after retiring to lick my wounds (above Shimla) the circle rate at Rs. 35 lakhs per bigha is only half of the actual market rate. It is inconceivable that the governments are not aware of this, what with their armies of Registrars, Tehsildars, Patwaris and what not, all with their hands on the pulse (if not the pocket) of our citizenry. Simply by doubling the existing circle rates the government would instantly knock off the major chunk of black money from the economy: in the process it would also realise thousands of crores of additional revenue as stamp duty every year and real estate prices would come down to sane levels as the speculators with their illegal money would be driven out of the market. A win-win situation, you would say? Well yes…..except that our politicians only want to win-win elections, and for that they need the difference between the two rates to continue. As Adam exclaimed after having a long, hard look at the uncovered Eve: “Viva le difference!”

Second: why make a joke of our Income Tax mechanism? Only 4% of our population files income tax returns and only 1% actually pay income tax! Can you believe that there are only 40000 people who have declared an annual income of Rs. One crore (and above) as per the IT Department’s own figures? In a country where thousands of luxury cars are sold every year, where gold imports crossed the figure of US $3.5 billion last month, where a flat in South Delhi sells for Rs. 15 crore, where one peg of premium single malt at the Habitat is priced at Rs. 7500/, where the Presidential suite in a Jaipur hotel at US $ 45000/ for one night is the second costliest in the world? Why, I could point out 40000 of the one crore plus types within a ten minute walking radius of my mother-in-law’s house in GK-I! And this is when one can barely walk in GK-I what with all the Audis, Mercs, BMWs and Rolls parked on the roads there!

Furthermore, I am fairly confident that most of the people in that hallowed neighbourhood pay less tax than I do on my pension. Their salaries would be negligible and every single expenditure they incur, down to the toilet paper in their eleven bathrooms, is booked to either their company or their business – drivers, servants, electricity bills, fuel, parties, travel, holidays, even their pet dogs who are probably covered under Security Expenses. (OK, there may be some exaggeration here but not much, I assure you). Not only does the government lose on Income Tax, it is also fiddled of its Corporate Tax.

The other great escape route deliberately provided is the exemption from Income Tax for agriculture. There is no rational basis for this and therefore its justification does not even merit a discussion. This exemption may appear obtuse and stupid but actually its quite clever, from a crooked perspective: it enables politicians and bureaucrats to launder their ill gotten wealth by showing it as agricultural income even if the land they own is as barren as the Gobi desert. I can bet my next DA installment that there is no major politician in this country who does not” own” agricultural land. It is not for nothing that Ms. Jayalalitha bought 2000 acres of land – such a huge area can launder far more than what she is accused of amassing, and I have a feeling that she may yet avoid the VIP cell on the strength of this acreage!

You can be sure the government performs its rituals in this matter also. It sends notices to you and me for not declaring the Rs. 2373/ received as interest on our Savings Accounts, and fines us for filing our returns two months late. It conducts raids with much fanfare and nets the plankton and shrimps but allows the sharks to get away. But it will do nothing to broaden the tax base or to suck the undeclared income out of the parallel economy. It will not mount surveillance on some HNI individuals to match their life-styles with their declared incomes. It has PAN, TAN and what not but cannot or will not track purchases to any effect. Nothing else can explain the deplorable tax base of a country whose GDP is estimated at almost a trillion US dollars.

And finally, that other great repository of black money – our political parties. The disclosed accounts (and these accounts are about as transparent as the sludge in your sewer line) reveal that both the Congress and the BJP have collected funds in excess of Rs. 2000 crore each and BSP is not far behind. We have no idea where this money came from, and we will continue to remain blissfully ignorant because ALL parties have ensured that the RTI Act will not be made applicable to them. They have refused to comply with the order of the Election Commission to provide information to querists. The Commission itself, clearly surprised by its own temerity in passing such an order, has retreated into its protective carapace, trying to figure out which way the wind is blowing before even attempting to enforce its order. And so tens of thousands of crores of black money continue to be spent on elections. The ritual? Oh yes, the EC fixes modest limits on expenditure by candidates, appoints Observers, audits expenditure statements, issues notices and warnings and is interviewed by Rajdeep Sardesai and Rahul Shivshankar.

We don’t need treaties or SITs to flush out the black money in this country. We simply need to go beyond rituals, to the one real religion that this country so badly needs – good governance.