Mohamed Bouazizi, a Tunisian street vendor, set himself on fire in December of 2010. Enraged by confiscation of his meagre goods as a street hawker and for the ill-treatment meted out by a municipal officer set Bouazizi up to attempt suicide and pushed a country on the brink of its patience into turmoil.

The “Arab Springs”, as it came to be called after the term was first used in an America Journal, is a holistic reference to the net sum of events that ravaged the Arabian lands in and around the Mediterranean Sea after 2010. For some of these countries, as with Egypt and Libya, the movement descended from a lineage of turmoil and years of anger against authoritarian fallacy.

Pattern of civil resistance that was most widely documented in the protests at Tahrir Square, Cairo spread like wild fire. Most Arab countries were engulfed in a common sentiment of civil uprising – some turned very violent.

While the genesis of the movement is argued upon by experts as being a two-way fractional divide between the secularist agenda and a purely economic one, the movement has left an indelible mark upon the countries involved.

Closer home, there was the Jan Lokpal movement that many identified with. While India, albeit sparingly, enjoys the privilege of secular existence, most Arab countries suffer from an aggressively non-secular inheritance and worse even, a dictatorial legacy.

While some of the protests were driven by secular tones, most were simply echoes of the incipient dissatisfaction with living standards, corruption, human rights violations and the absolute pragmatism that monarchies in these nations had the led the people into. The secular aspect aside, the Indian movement did echoe other aspects of the Arab Springs.

Anna Hazare, fasted against corruption. The treatment of women in a genially male-dominated society, was no new chapter, but got unprecedented backing from masses with the Delhi rape case.

Arvind Kejriwal and his team spring-boarded the Anna Hazare’s social intervention as a celebrity lookalike of a socio-political upsurge. Kejriwal’s endeavor – appreciated though it should be for its force – rose and fell like a bag of frozen beans in the desert – came in from the cold and simply couldn’t take the heat.

Where the country was not much concerned how the Jasmine revolution in Arab lands unfolded there was the growing feeling of injustice and ill-treatment among the masses at home. India’s own protests were aviated by the desire to rid the country of corruption. 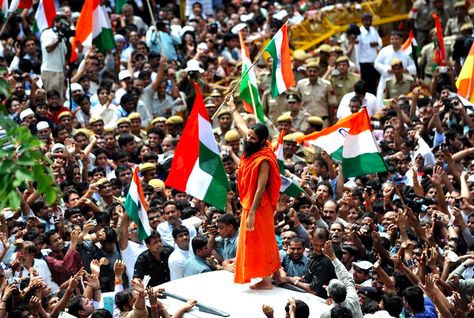 While the issue of corruption is far more secretarial as compared to any other issue – as it can be delegated repeatedly from a national stage to a more personal one – the protests did manage to raise eyebrows and garner support in general, if not one that was ideologically inclined.

The difference between the Arab Springs and the protests that fumed at about the same time in India, is the absence of a clear vindicator of the protests’ basis. While Anna Hazarre flittered as the face of the movement, owing to ill health and the cuffs of old age, Kejriwal and his troops rose ceremoniously – momentarily slap-dashing every established anchorage of belief – but eventually succumbed to a conflict of political interest.

While all this transpired the bemused and utterly directionless public, were left to soul-search and toss the incumbency coin repeatedly, before the LokSabha elections, found their calling and saviour in – you know who.

The impact of the Arab Springs may not be acknowledged by the uninspiring, inward-panning lens of the country’s media, or the self-interested campaigners of the country, subconsciously the country did beat to global nerve tune.

What started years ago, and reached a turning point with one Mohammad Bouazizi’s surrender to the ghastly downturns of personal strife, ended with a the first elected government in Tunisia, one that claims to be more secular than Islamist, and more inclusive than the radicals elsewhere.

As for India, for its newfound comfort in a nationalist, and the first unfurling winds of change, it owes little if not a lot to the Arab Springs movement.