It is in the very nature of news that almost everything is in there for the wrong reasons. It so happened that a few thousand people gathered at Marine Drive, Kochi in conservative Kerala for ‘Kiss of Love’ – marked as a symbolic protest against trying to impose moral policing. The provocation had been that a group of self appointed moral policing people vandalized a coffee shop in Kozikhode, after accusing the owner of encouraging young people to display their affections publically. The planned protest turned out to be a whimper of curious gatherers and eventually fizzled out after about 50 odd protesters were taken into preventive custody by the authorities. 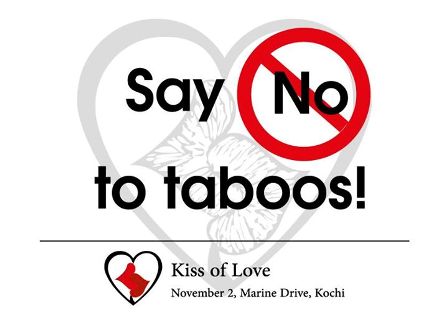 While the incident is not new – as some years back students of Delhi University had staged a similar protest before the then chancellor’s office – but it is a disturbing trend that those blatantly breaking the law bend the powers into accepting their viewpoint.

You could be forgiven for flaunting your alliance to such groups, be it Hindu or Muslim, who are attempting to force a moral and code in the country. What you may not be forgiven for is about protesting against that moral policing, which applies different yardsticks for different people and conflictingly used on different occasions.

Firstly, consider the psychological aspect of this deeply flawed aggression. Affection public or personal, is affection nonetheless. A country which has had to set up 660 rape crisis centers has a lot more on its plate than a little perverse public show of affection. Rape constitutes inhibitions to harm and cause malice, whereby it becomes a crime under the law. A radical conservative may now even suggest that perversion, be it of any level, in public is one of the main reasons why rapes happen.

To suggest that public affection of any kind is socially affronting and perhaps suggestive of a degenerative society is going too far.  Radicals, hopefully well-educated in their own right, should be the first ones to acknowledge the fact that Hinduism is a derivation of a sexually liberal landscape one that has only been re-shaped to look its dogmatic worst. Only in a country not up to terms with its Paralympic identity can there be the slew of such radical output without any constructive afterthought about it.

Where even euthanasia is being accepted and permitted by law around the world, a little public display of consensual affection should be the least of our problems. That said, but there is much more than that and the modus operandi that many young couples adopt do at times shake up what acceptable public behavior should be. Encouraged by the graphic television shows, and shrinking of parks and public spaces has slowly brought the in your face attitude about displaying private affections to our front doors.

While being in love or expressing love is very natural but making a bold public display entwining bodies, provocative sexual moves bordering on obscenity is definitely not an acceptable public behavior. Privacy confined to bedrooms should stay a long way away from common public area displays.

The radicals too need to take a more rational stand. Permitting watching Sunny Leone shows from the protected confines of a home and enforcing a strict code outside don’t match up.

‘Whatever it is, I’m against it. Unless it is on TV; well presented, advertised, sold and sealed’ is a self defeating stance. ” And perhaps, as a social experiment we can have Sunny Leone kiss in public – but wait she can do that, Can’t she?