Dehra Dun : Will Uttarakhand chief minister Harish Rawat heed the suggestion given by union health minister Dr. Harsh Vardhan to cope the shortage of doctors in this small hill state, or shy away from it only because it comes from a senior BJP leader and the party may take credit for it. This is the question doing the rounds in political and medical circles here.

The union health minister recently said that he would be writing to Uttarakhand chief minister to invite medical specialists from all over the country to come on a short holiday along with their families to the various tourist destinations and the far flung areas of the state. While the government could foot the bill for their travel and provide the visitors with board and lodging the medical professionals could give their services to the residents of the region.

While the doctors who could take the assignment as an extension of their professional work, could also with their families seeing the exotic places of interest in Uttarakhand free of cost, the small hill state on the other hand could benefit by getting the services of specialists of various disciplines for its residents even in the far flung interiors, at nominal costs and thereby reduce the pressure on the states limited health resources.

It may be mentioned here that Uttarakhand is reeling under a severe health crises because of the acute shortage of doctors, specialists and other para-medical staff. According to reports there is an urgent need of about 2000 doctors and 700 specialists besides other para-medical staff to bring some sense of credibility to the health services being offered in this small hill state.

Sources in the health department said:

That doctors transferred to the distant hill places seldom joined duties and either got their transfers cancelled under political pressure or went on long leave. They basically shied away from joining at the remote and distant places because of lack of facilities and infrastructure including schools at these places. 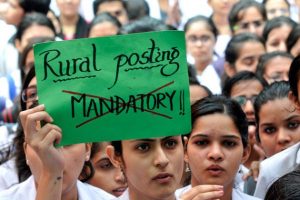 They said that the doctors who had signed a bond in the state medical colleges should be made to join the far and distant places on their joining the state health department, which could reduce the shortage to a great extent. “But it had generally been seen that the freshly trained doctors also break the bond and do not join their duties at the far flung and distant places”, they pointed out.

Health minister Surender Sing Negi while admitting an acute shortage of doctors in the state which was telling on the medical services being provided to the people, said that the government was doing its utmost to get the services of as many doctors as possible. “The chief minister recently announced an extra 20 per cent initiative packet to doctors willing to serve in the remote and distant areas of this small hill state, and the department is waiting for the response”, he claimed.

Asserting that the state government had yet to receive the suggestion of the union health minister, he said that during the recent visit of Dr Harsh Vardhan to this small hill state the need for medical colleges in Uttarakhand was stressed upon as the two medical colleges hardly produce the required number of doctors to meet the requirements.

Meanwhile there was uncertainty in the health department on the impact the suggestion of the union health minister would have on the health services of the state. “True a number of specialists may visit the state with their families for an outing or a holiday, but how much time would they devote in seeing patients, as they would need time for sight-seeing with their families”, a senior doctor said on conditions of anonymity.

Then the health centres at the far flung and remote places do not have the necessary equipment, infrastructure and para-medical staff. Under these constraints will the specialists who are used to working under the best of conditions be able to deliver the type of services that the state government is hoping to get from them, the doctor wondered.

However, though he shared the optimism that many in the department have, that the suggestion could be a stop-gap arrangement to provide specialist services to the masses in the remote and far flung places of the state, he cautioned that even the specialists could come at a specified time only and not round-the-year.

“It is only when the schools are closed for vacations or it is the summer or spring months that are about ideal for visiting the mountains and most of the specialists will like to come and not during the other months. Besides most of them will opt for the tourist or pilgrim destinations, rather than fanning out to the remote and distant places that are actually crying for want of medical attention”, he opined.