Dehra Dun : Uttarakhand was carved out to meet the aspirations and give wings to the hopes of lakhs of people of the hill regions of Uttar Pradesh, following a long agitation, which also took a number of lives. Sadly while the Uttarakhand Kranti Dal, which spearheaded the statehood agitation has almost been decimated to oblivion, the aspirations and hopes of the people have taken a severe beating.

In the near 14 years that this small hill state became a reality, the factual position has been in sharp contrast to the hopes and expectations of the aam aadmi. Villages are getting deserted as the villagers from the higher reaches of the state are migrating in search of greener pastures. The once green fertile steppe fields, where crops were cultivated are now being taken over by weeds and wild grass.

It is a sad story but the fact is that there is a complete lack of political will and absolutely no vision in the state leadership, coupled with a “frustrated babudom”  of Uttar Pradesh that opted for Uttarakhand  for obvious reasons, only ensured that the situation got from bad to worse. Rather than being accountable to the people to deliver, the bureaucracy is ruling the roost. 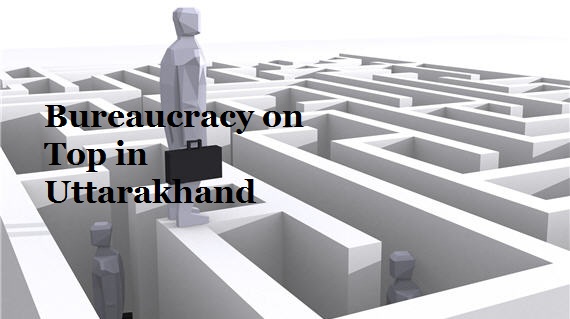 However, thankfully, the attitude is changing, albeit slightly, in some people after the dismal performance of the various governments and the non-deliverance of the babudom. A part of the political leadership which has been taken for a ride by the executive, and some organizations are now realizing that it is time that they spoke out so that there could be at least some deliverance to the people and the state.

Perhaps chief minister Harish Rawat will heed what his party MLAs are saying. Congress MLA, Hira Singh Bist minced no words when he said that the state officials who turn a deaf ear to the instructions of the chief minister, care a hoot about the elected representatives. “Uttarakhand government is in the grip of the bureaucracy and the state officials are dominating the proceedings”, he lamented.

He hastened to add that while development projects were being ignored in almost all the districts of the state, the spate of protests and agitations by government employees indicated that they too were not happy with the decisions being taken by the senior officials. While this would reflect on the performance of the Congress government in the state, developments works will come to a standstill, he claimed.

Yet another party MLA, Mayukh Mahar, went on record to say that senior officials in his assembly segment were dominating the proceedings, giving a go-by to the elected representatives. “While the people look upon us for various works, our pleas fall on deaf ears, and that too when we are in power”, he pointed out. To press home his point, he has announced going on an indefinite hunger strike from Oct 2, at Pithoragarh.

Even some NGOs are now pointing out the lackadaisical attitude of the babudom. “About 340 villages have been identified as disaster prone and need rehabilitation, but there is no policy for the purpose in the state”, said Laxman Singh Negi, secretary, Jandesh, adding that hamlets affected by mishaps had been increasing during the past 14 years, but no one was paying heed.

Incidentally, realizing that a portion of the large amount of funds given to Uttarakhand in the aftermath of last year’s tragedy by the central government may have been siphoned off, the opposition BJP had been demanding that the state government issue a white paper on how and where the money had been spent and the amount given as compensation for relief and rehabilitation. But the state government refused to oblige.

Now following the suicide by a businessman, Om Prakash Uniyal in Guptkashi, the alleged ill-doings are  surfacing. State general secretary BJP, Prakash Pant, claimed that the businessman in his suicide note had revealed the pick and choose attitude that had been adopted while disbursing ex-gratia. “Based on self assessment some businessmen were given ex-gratia ranging between Rs 75 to Rs 80 lakhs while the deceased who suffered huge losses were given a mere Rs 2.45 lakhs”, he pointed out.

The people in the region held a demonstration and demanded that a CBI enquiry be ordered into the disbursement of the ex-gratia and other relief in the aftermath of last year’s tragedy. Even the state BJP has demanded a CBI enquiry saying that the suicide note of the businessman should be considered a dying declaration and form the basis of the inquiry.

The pertinent question is that will there be a strong enough political leadership in the state that can heed the demand of the people, or will it continue to play second fiddle and dance to the tune of the executive. Fourteen years may be a short span in the life of a state, but in the lives of individuals, specially those who faced the lathis and bullets during the agitation, it is time that there was a ray of hope towards their aspiration and expectations from achieving statehood.