Accuracy of weatherman’s forecasts having improved immensely, of late, rain Gods (Devta’s) in traditional hill societies are a restless lot for they find it as an encroachment upon the divine domain.

“We have had much snow and rain over the long winter, this season,” says Pradeep Kumar, an apple orchard owner from Rohru, “the weatherman’s or the forecast over the internet has been very accurate in handing out timely warnings of heavy snow, overcast skies or about widespread rains.”

In Himachal where about 90 percent population (2011 Census) lives in villages, the village Devta still holds sway over much of the social and religious life of the community that largely remains agrarian. 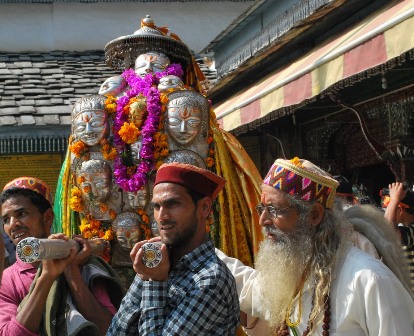 The sowing season or the crop harvest, earlier dependent upon stable weather cycles but over the last few years disturbed that weather scientists relate to effects of global warming, used to have many hill village folks turn up regularly for divine intervention from the Devta for protection of crops, timely rains and dry spells for healthy harvests.

The new phenomenon of weather forecasts on the internet, or the accuracy of weatherman’s predictions has left many villagers uneasy about the divine powers of rain gods waning.

Octogenarian Tabey Ram from Kullu valley recalls a time when all tradition revolved around the village Devta.

“In times of distress, especially when there was a natural calamity, heavy rains or snow or severe drought spells, the village turned to the Devta and when the Devta would oblige, a goat would be sacrificed as fulfillment of a pledge,” said Ram. “Times have changed and not many live by the faith anymore,” he adds.

Himachal meteorological director Manmohan Singh says that 23 automatic weather stations and 71 automatic rain gauges, installed in the state over the last 3 years, has enabled the met office to predict short and long term weather much more accurately. “While internet sites depend solely upon satellite data but we having gathered a lot of ground data score over them in weather forecasting for local conditions,” he said.

Fast evolving weather science dispelling the powers of the Devta’s has had a devastating impact on the economy of the village deity that had sustained a unique culture for generations.

With thousands of Devta’s and Devi’s housed in village temples across hills and valleys, some of the lesser gods with not enough means to support the institution are carried by devotees in palanquins into urban townships, in summer. Calling the faithful to reverence, the donations received help to sustain the tradition.