One’s inner character is revealed in his day to day conduct. What we are today is the resultant of what kind of impressions we nurtured in the past and how we conducted ourselves. One person is kind, humble, patient and bold while another is hard, cruel, self-important and unforgiving.

Well, our PM Narendra Modi has lots of those pleasantly humane streaks that cross the barrier of caste, creed and nationality. His simplicity, humility, boldness and non-ostentation have not failed to inspire the millions of Indians now. 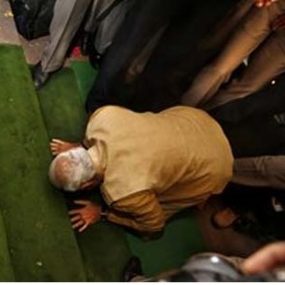 PM Modi’s humbly kneeling down and touching the forehead on the ground before the entry into the parliament house raised the eye-brows of the skeptic while many drew from it the message that humility leads towards the godliness.

Incidentally, a lonely boy of about 9/10 years old instead of catching a Gorakhpur train back-to-home (Nepal) mistakenly boarded a train to Ahmedabad. This unknown and weary journey was to unfold an amazingly covetable destiny for him. The saga of the boy will one day be spread like a wildfire and mesmerize the world population. 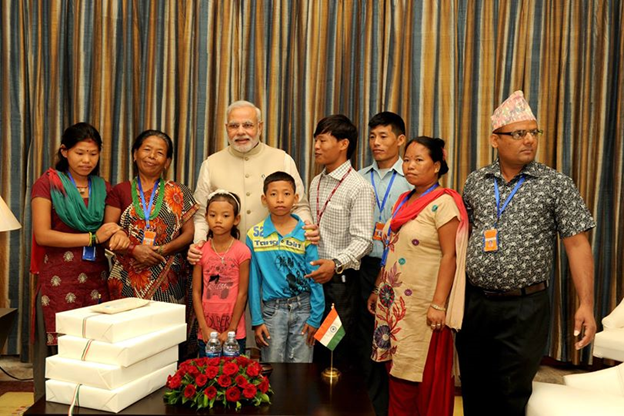 It must be a sheer divine intervention that this poverty-stricken boy Jeet Bahadur from a remote village of Nepal was to meet the future Prime Minister of INDIA —- a rare persona who with a rare ability to feel the heart-beat of the poor and downtrodden.

However godless roars the biased media make we have long been seeing the enough amount of unmatched qualities in Narendra Modi. The kind of life he lived through and the ordeals he surmounted, Modi’s past lives are very intriguing. The heart-melting anecdotes of Modi abounds in his biographies written by eminent scholars.

Well, Narendra Modi could have just ignored the poor and scruffy Jeet Bahadur from a foreign land after providing food for a couple of days. Or, he could have handed him over to any responsible hotelman or a household. There are countless households that pounce upon the poor and young boys/girls. They are much sought after for the menial job.

Again, Mr Modi could have look into other options — asking this tender boy to stay as his servant who would look after his chores – washing his cloths and dishes and run errand. Thus, so he would not be weighed down by any obligations later. Just a few hundred rupees per month as a salary. And, any fine day he could say bye-bye. That would itself amount to be a great help for a boy and Modi’s benevolence to employ him.

Further, Narendra Modi was alone then, without the family and already entrenched deeply into the sizzling politics. So, taking care of another strange boy would be a huge burden. But the sad and innocent looks of the boy must have stirred Modi’s heart of compassion. The feeling of humanity outpaced the pang of responsibilities.

Narendra Modi arranged for his studies and bore entire other expenditures till the date. Most amazing thing in PM Modi is that he has not used this boy for his personal work though he badly needs a bunch of the subordinates surrounding him throughout for the odd jobs.

Mr Jeet is a very well groomed joyful hunk now. He is pursuing BBA from one of the institutes of Gujarat. He is also an ace boxer, horse-rider, footballer and swimmer.

Observing very closely, every gesture, every speech and every wave and demeanor makes him more endearing to the masses. Apart from his political shrewdness, it so appears he is quite determined now to see all 1.25 billions Indians as happy as rags-to-riches Jeet Bahadur.

Observing very closely, one becomes quite convinced that every gesture, every speech and every wave and demeanor makes PM MODI more endearing to the masses. Apart from his unmatched political shrewdness and boldness it so appears he is quite determined now see all 1.25 billions Indians as happy as Jeet Bahadur — ace boxers, horse-riders, footballers in the respective fields of development. The zeal and zest with which the PM Modi delivered the Independence Day speech has literally boosted the morale of the masses. Jai Hindi !

Shillong-based writer and researcher, Salil Gewali is best known for the research-based work 'Great Minds On India', which has earned worldwide appreciation. Translated into 12 languages, his book has been prefaced by Dr. Kamlesh Lulla, a Houston (USA) based NASA chief scientist.