Dehra Dun : Uttarakhand chief minister Harish Rawat seems to be in utopia after winning all the three by-elections held recently in this small hill state. This is perhaps why he feels that all is going high and nigh as far as the ‘aam uttarakhandi’ is concerned.

This is why perhaps, he reels off figures from the official data that only 11.26 per cent of Uttarakhand’s population falls below the poverty line in contrast to 22 per cent of the country’s population. It is such “unrealistic” figures of the state government that has made Uttarakhand a paper tiger. 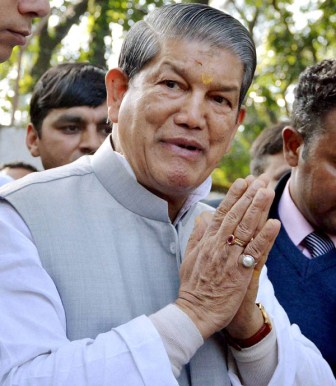 One could just question the chief minister why is there mass exodus from the hilly terrains of this small hill state. Why are villages being deserted and fertile agricultural land becoming waste land as the hands that are required to till have decided to move away in search of greener pastures.

Believing in the number game on papers, the chief minister has also had the state information and public relations department dole out figures of the lakhs of families to whom ration is being provided at subsidized rates.

The truth is that the ration shops are being gheraoed by the people who are not getting ration from the fair price shops and the District Supply Office is besieged by people protesting on the non availability of ration at the shops. This is the condition in the state capital and one wonders what it is like at other places, but the chief minister has adopted an ostrich syndrome to this.

And as far as the aam aadmi is concerned, he is caught in a vice like grip of rampant corruption and a babudom which is unaccountable to any one. Such is the state of affairs that the chief secretary had to issue instructions asking the top secretary-level officers to move out of their air-conditioned offices and take note of the condition at the grass root level.

The state government has no policy for either the doctors or teachers because of which there is a dearth of both in the higher and difficult areas of the state. Health centres are without doctors and schools without teachers but all is going honky dory as far as the chief minister is concerned.

More about the state’s capital city. Dr Brij Mohan Sharma, secretary, Socity of Pollution and Environmental Conservation Scientists (SPECS) said that a survey conducted by it that water veing supplied in a majority areas of the city was not fit for human consumption.

The fact that there was less than 10m per cent participation in the char dham yatra, despite full page advertisements in leading dailies and vernaculars of the country assuring people that the state government had made all the necessary arrangements for a safe yatra indicate that it has lost all credibility as far as the masses are concerned.

Swami Agnivesh, well-known social activist, minced no words when during a recent visit to the city he said that the disaster last year in the state was a result of the bad management and selfish motives of the state government.

“Starting the yatra again this year was the last thing the government should have done”. Pointing out that the yatra had already been stopped on a number of occasions, he added “When the government knows that the situation is not favorable and the restoration work is yet not complete, then what was the need of starting it”.

Obviously Harish Rawat seems to be a man in a hurry out to appease people who matter and therefore starting the yatra, like so many other things, despite things not being in place had to be done.  He has issued thousands of government orders and hundreds of foundation stones without bothering whether anything will materialize where it is needed – at the ground level.