Shimla: Investigating and pressing charges against political opponents that were tabulated in a charge sheet prepared by Congress during the run up to the 2012 assembly election has brought out differences between chief minister Virbhadra Singh and his senior cabinet colleague GS Bali.

On the occasion of re-launching of an upgraded version of Department of Public Relations website here today, the chief minister said, “the government is bound to act upon and investigate a set of charge prepared by the Congress party as an opposition party, that were complied by a committee set up by the state party president and were submitted to the President of India.” 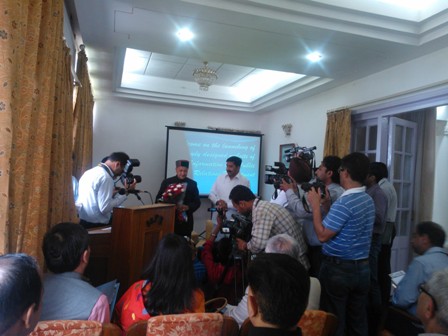 “A charge sheet is only a charge sheet and one need not fear if anything unlawful has not been done,” said Virbhadra, reiterating that as chief minister he was bound to act and investigates the charges made out by his party.

With functioning of HP Cricket Association, construction of Dharamsala Cricket Stadium, buying of tea estate lands in and around Palampur, construction of high end cottages and apartments in a green belt of Shimla and Kasauli, and other charges figuring in the document prepared by a committee headed by transport minister GS Bali that the government is now investigating, the chief minister denied that the government was being vindictive.

He maintained that at the time when the charge sheet was documented, he was neither a member of the committee that listed the charges nor was not part of the state assembly but was serving the country as a union minister in Prime Minister Manmohan Singh’s cabinet.

Transport minister GS Bali, whose differences with urban development minister Sudhir Sharma are out in the open, only last week attempted to pass the buck by holding that the charges were made out from the documents supplied by Sharma, industry minister Mukhesh Agnihotri, party president Thakur Sukhvinder Singh and others. Responding to the stand taken by the minister, Virbhadra Singh said, “it was the responsibility of the Congress committee to draw up charges from the set of documents submitted before them after having deliberated upon them.”

Differences between Bali and Sharma are reported to have made the transport minister even hold out a threat of heading on a long holiday.

At the launch of a book, last week, when the chief minister was questioned about a minister having threatened to resign from the cabinet, Virbhadra had retorted, “whosoever wants to resign may do so. I have given my minister a free hand”

About the growing number of Congress leaders demanding passing on the party baton from president Sonia Gandhi and vice-president Rahul Gandhi, the chief minister said, “it is not a time for petty bickering within the party but a time for serious introspection. Victory has many fathers; defeat is also a collective responsibility.”

On Haryana congress leader Birender Singh having crossed over to BJP (someone with whom Virbhadra’s differences as party secretary incharge for Himachal were known) he said, “Congress would not be affected; in fact it could prove beneficial for the state unit.”
Ruling out any plans to expand the cabinet before the upcoming monsoon assembly session, the chief minister said, “there would be no reshuffling of ministers either.”