Shimla: Taking stock of the recent cloud burst disasters and damages by heavy rains, the state government has put the count of people killed at 31 and assessed the damages to roads and bridges at 412 crore. 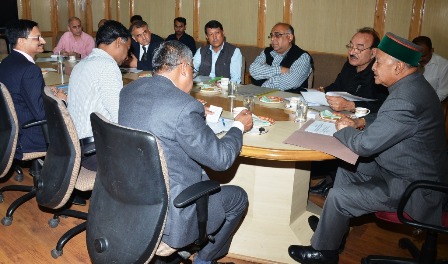 Besides the human lives lost, it was disclosed that 633 cattle had perished.

In all 336 roads had to be closed to traffic due to rain damages. As many as 187 roads had been opened and work on opening the remaining roads was going on, said a government spokesman.

The chief minister has directed for restoring the bridge on national highway 88 over Kunah rivulet.

Discussing the bottle-neck on Shimla-Kinnaur National Highway, the chief minister said that a permanent solution to the landslide zone near Urni would be found.

Blasting undertaken by Jaypee to construct tunnels had further damaged the fragile hills of the Kinnaur wherever hydel projects were being set up, said Virbhadra Singh.

As many as 1953 rural water supply schemes were either fully or partially damaged.

While the damages due to rains was heavy last year also, but of the Rs 250 crore sanctioned by the central government for natural calamity assistance, till date only rs 95 crore had been released.