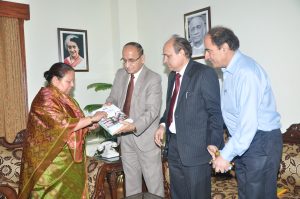 On the occasion of presenting the 2011-12 and 2012-13 annual reports to Governor Urmila Singh, HPPSC Chairman KS Tomar disclosed that an e-Governance project estimated at Rs 6.48 had been sent to the union government IT ministry.

“This project would enable complete computerization of HPPSC and would also lay the foundation for holding paperless online examinations conducted by the commission,” said Tomar.

Announcing plans of establishing a model library, the chairman said that it would be one of its kind in the country that would come handy in meeting the needs of candidates preparing for various competitive examinations such as IAS, HAS and others.

“The library would be set up in the new block, for which the state government has already sanctioned Rs 2.80 crore,” said Tomar.

About the reforms introduced in functioning of the commission, the chairman let Governor Singh know that after the employees were trained, rejection of online application forms submitted by candidates on had come down sharply in the last one year.

Introduction of a Toll Free service was helping out thousands of candidates getting ready access to information, with their queries being answered on the go, he said.

An e-Payment gateway for paying online fees had been established, for which and MoU had been signed on 29 Nov, 2013 with Punjab National Bank, jammers had been installed at examination centers, bar coding of answer sheets for maintaining secrecy had been adopted and optical marker reader outer sheet for holding HAS & HJS had been introduced, the chairman said.