Shimla: Whispers for a change in the congress party may have gone louder but the sporadic dissidence has failed to muster enough strength to challenge the old guard leadership of Virbhadra Singh, his wife Pratibha Singh having lost out to a newcomer in the parliamentary elections notwithstanding.

Where young Turk Rajesh Dharmani, a two time MLA from Bilaspur, soon after the polling concluded but before the results were  declared, resigned as chief parliamentary secretary to join a growing group of dissidents, other detractors like senior leader Asha Kumari had at the very outset refused to join the Virbhadra cabinet after winning the assembly poll in December, 2012.

Defying the odds, BJP had obtained a clear lead in 59 of the 68 assembly seat, including the prestigious Shimla rural seat represented by the chief minister himself; congressmen are feeling the heat of an eroded base even though the assembly election is more than 3 years away.

A cabinet minister, sympathizing with the dissidents confided with this reporter, ‘they are rebels without a leader and the high command is hardly in a position to thrust any new leader on the state here.’ 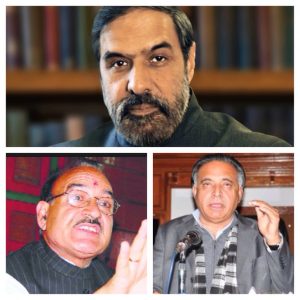 In the run up to the state assembly election, senior minister Kaul Singh Thakur had staked a claim at leading the party into the elections but had retracted after Virbhadra Singh had insisted on fighting the elections under his leadership.

The dissidents are said to be grouping around former union minister Anand Sharma to challenge Virbhadra’s domain but lack numbers to tilt the balance.

“Sharma is a favorite of 10 Janpath, but given the discomfiture Rahul and Sonia Gandhi are facing for the party’s rout in the parliamentary, the party president and vice-president are hardly in a position to push for a change in the state,” said the minister on conditions of anonymity.

Unmindful of the dissidence in the party, Virbhadra before heading for Delhi today to apprise the leaders about the defeat in the state said, “there are 3-4 congress legislators who keep making noise but it will come to nothing for the party is with me.”

In fact to send out the message as to who is boss in the state, late in the evening yesterday, the chief minister made impromptu appointments of four congressmen, which include former MLA’s Vijay Singh Mankotia, Harshwardhan Chauhan and Rajinder Rana, and loyalist Ramesh Chauhan as chairpersons and vice-chairpersons of state level bodies.

The last time when the chief minister had made such appointments, state party president Sukhvinder Sukku and others had objected to them. At the intervention of the party high command some of them were even put on hold, which does not seem to have come in the way this time around.

A veteran of many political battles, Virbhadra has been holding complete sway over the party since 1983, when Delhi had placed him in the state to replace Ram Lall Thakur, who had to resign over a timber smuggling racket.