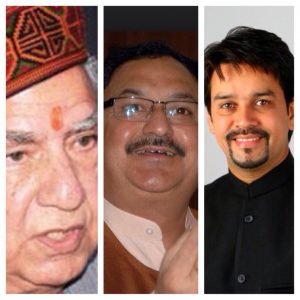 Shimla: Ties bolstered during 1994-99, a time when Narinder Modi was party general secretary incharge for Himachal, are being counted upon to include at least one of three MPs from the state in the Modi cabinet.

Where accommodating Shanta Kumar, along with old guard leaders LK Advani and Murli Manohar Joshi, may prove difficult, Jagat Prakash Nadda (53) a Rajya Sabha MP and a vice-president of BJP and the young Anurag Thakur (39) national president of Bharatiya Yuva Morcha are being considered as likely candidates.

Nadda, who hails from Bilaspur, is considered to be close to Modi from the time he was party incharge for Himachal. During the period, Modi had challenged the dominance of Shanta Kumar in the state unit and project Prem Kumar Dhumal as the party leader and overseen him being elected as chief minister in 1998.

In Dhumal’s last term (2008-2012) as chief minister, Nadda was made cabinet minister but had resigned two years into the term and moved to Delhi to be part of Nitin Gadkari’s team in the party.

The young Anurag Thakur is a three time MP from Hamirpur and is the son of former chief minister Dhumal.

Though Himachal with its four Lok Sabha seats hardly count in parliament but prominence of these MPs and Modi’s association with the state during formative years as a leader have given rise which many party men here are banking upon.

“With BJP having a comfortable majority, there would be pressures on Modi to pick his team and we expect a representation from Himachal in the cabinet, say party leaders here.