Shimla:  The loud, shrill and aggressive election campaign that BJP was running, never before seen in India, was being fueled by black money, union minister for commerce and industry Anand Sharma stated before media here on Monday.

Asking the election commission to cognizance of it , the minister before reporters counted that the massive publicity and advertising budget on 514 television channels, 54 national dailies, 75 % of which was pre-booked by BJP, spread over 45 days of election campaigning was by rough estimates involved over Rs 10,000/- crores of expenditure.

“Where is the money coming from,” Sharma sort to know about the blitzkrieg campaign unleashed on the voter?

He said the 2014 election was a keen contest about Indian National Congresses all embracing ideology that believed and stood by India’s plurality – diversity against that of RSS and BJP which polarized along religious lines. 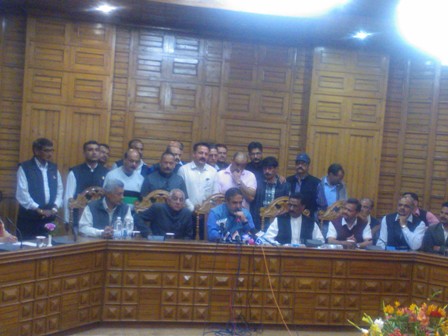 The BJP campaign had developed a cult figure to the extent that Narinder Modi had been elevated to the status of a demi-god for the party was intent on capturing power by all means and at any cost.

It was an ominous warning for the country as it was the most serious threat to the government ever for BJP has sought to centralize all power and concentrate it in the hands of one individual said Sharma.

Choosing not to comment on the governments move about instituting the snoopgate judicial commission, he said “law minister Kapil Sibal and home minister Sushil Kumar Shinde had already made the governments position clear about it and he had nothing more to add to it.”

However he did mention that the matter was before the Supreme Court also but the Gujarat government or its chief minister had not ever come forth on the issue of illegal surveillance of an woman.

Hitting out at Modi, he said Gujarat Model of Development was a myth created by spin doctors for figures belie the claims made.

Citing the case of ‘Vibrant Gujarat’ investment conclave held by the state government, the minister pointed out that according to literature published by the state propaganda machines, $1049 billions of foreign direct investment had been made in Gujarat since Modi became chief minister but according to Reserve Bank of India data, since 2000 only $305 billion of FDI till date had been made in India.

The largest FDI was made in Maharastra, followed by Delhi, Tamil Nadu, Karnataka and then Gujarat, he said.

Counting the gains made under UPA I & UPA II he said that to bring about transparency RTI regulatory framework had empowered the citizen, institutional framework had been strengthened, the country’s per capita income which stood at Rs 24,000 in 2004 had increased to Rs 69,000 in 2013, foreign reserves which were $100 billion in 2004 are currently at $ 300 billion despite the fact that crude oil was $23 to $25 then and now it was hovering at around $105 – 110 per barrel.

The GDP of the country which was $500 billion in 2004 had increased to 2 trillion dollars, claimed the minister.