Shimla: With elections to 105 seats to take place over the last two phases of a prolonged and staggered 9 phased election in the country, BJP today questioned the impartiality of election commission saying that where it was prompt in registering an FIR against Narinder Modi in Gujarat, it had failed to act on a complaint against Rahul Gandhi over a provocative statement made in Himachal Pradesh.

Jagat Prakash Nadda, BJP general secretary told reporters, “the election commission should act upon the complaint made against the congress vice president.”

The party has filed a complaint with the EC stating that Rahul Gandhi at a rally in Solan on 1 May had allegedly said that if Narinder Modi’s government came to power in Delhi, it could lead to the massacre of 22,000 people. 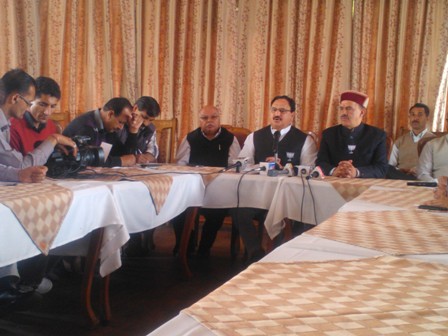 The EC was prompt to file a FIR within 3 hours of voted and holding of a impromptu media interaction after voting but it has failed to take cognizance of a complaint lodged several days ago, said Nadda.

He alleged that the commission had also failed to act against documentary evidence with video footage provided about rigging having taken place in Uttar Pradesh.

Apprehending rigging in the remaining constituencies where elections are to be held in Uttar Pradesh, Bihar and Bengal, Nadda said that BJP demands that para military forces should be deployed in all booths of the 105 seats for a free and fair poll to take place on 7 May and 12 May.

The BJP general secretary said that in the final phases, the congress election campaign had become devoid of issues and the leaders were making incoherent statements. He cited instituting of the snoopgate commission as one such action of a party which has sensed that it is losing power.

With much of the election complete, he added, election to the remaining seats was a vote for consolidation for Modi as prime minister.

Denying that BJP was raising communal tempers, the BJP spokesman said that raising of illegal immigrants in Bengal was not a communal issue but a national one for the authorities that be had failed to check infiltration across India – Bangladesh borders.

He differentiated between illegal immigrants having clandestinely acquired voting rights in India with those permitted by a court to Tibetan refugees. Tibetans were not illegal immigrants but had been granted refugee status and there was the question of many Tibetans being born in India, he said. However on the question of giving Tibetans voting rights, Nadda said that the issue needed to discussed in various platforms.

Listing out the issues for Himachal,  he said against mis-governance of the UPA government in Delhi and the Virbhadra government in the state, the  party intends to increase the import duty on apple for protecting the fruit growers, like it did earlier during the Atal Bihari Vajayee led NDA government.

Nadda said that Modi had already spoken about establishing a National Mission on Himalayas and establishing of a Himalayan Sustainable Fund for meeting the special needs of these hilly regions.

He said that tourism circuits with world class infrastructure would be established and to bring down accidents due to tough road conditions, the party intended to strengthen the railway network in the mountain states.

Being a fruit growing states, industry that would make value addition to the produce would be established. The party also plans to make Himachal  Pradesh and IT hub state, establish an AIIMS type tertiary healthcare institute and also found an Himalayan Technology Institute.