“All truly great thoughts are conceived while walking.” – Friedrich Nietzsche

There is a joy in walking that is incomparable to any other form of transportation. People of Shimla will know what I, and Friedrich Nietzsche above, am talking about because Shimla is the town of walkers.

Several roads leading to The Mall are restricted to vehicular traffic and this has created Shimla’s strong walking culture. Some tourists too come to enjoy serene walks in and around Shimla but it’s the locals who uphold the walking culture.

The benefits of walking are quite clearly visible in the form of smartly dressed senior citizens, with a cane in one hand, out on their daily evening walk. The secret of their straight backs and brisk pace is the walking culture of Shimla. They have probably walked daily for most of their lives. And it shows.

The HRTC Taxi Service runs from various neighborhoods of Shimla, connecting people to The Mall. It was a commendable initiative by the government with the aim of helping senior citizens, handicapped persons, patients and children.

But good intentions don’t always lead to good results. The Taxi Service has become a common mode of transportation for the able bodied locals because it is cheap and much less tiring than walking.

HRTC made some clear rules about this taxi service as is clear in the tender notice shown below. 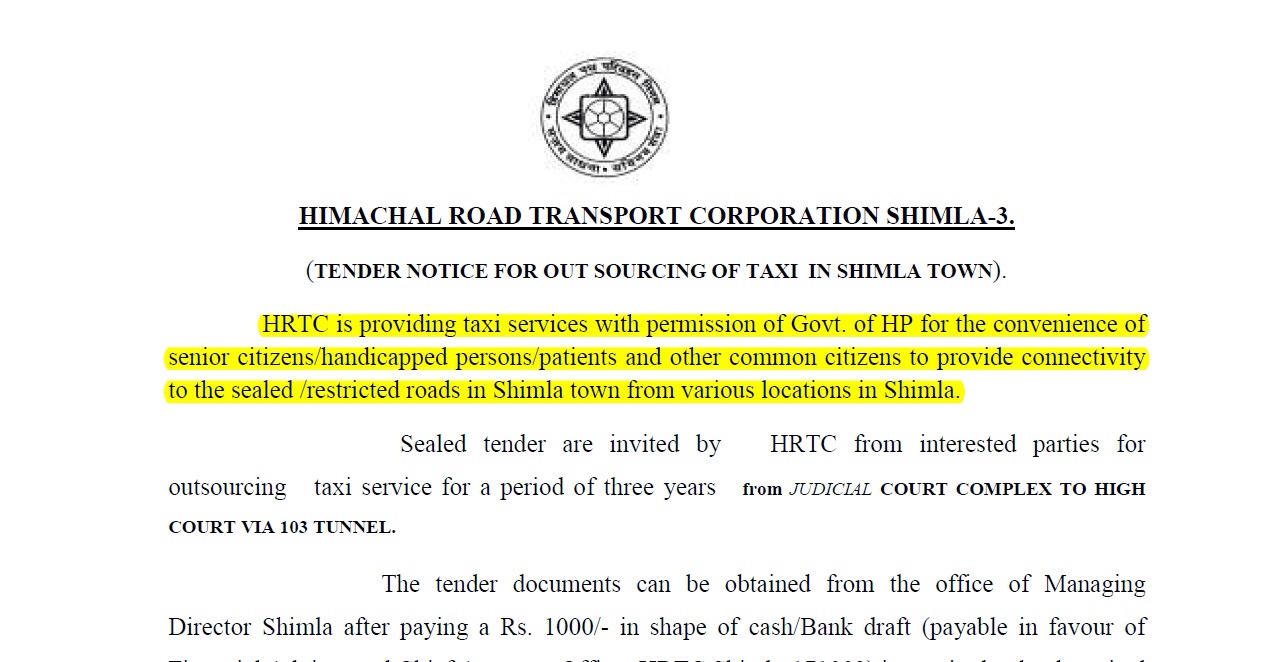 But since the service is not run directly by HRTC and instead outsourced to local taxi owners, the rules are not followed to any reasonable degree.

Instead of seating only 9 people, the stated capacity of the vehicles, the taxi operators try to stuff in as many passengers as they can to earn more money per trip.

The traffic police have begun fining overloaded taxis, but still the taxi drivers try to get away with it as often as they can.

As seen above, the tender notice clearly states that physical handicapped, senior citizens, patients and children below the age of 10 will be allowed into the taxi first. If any seats are left, able bodied citizens can also board. The responsibility to make sure that this rule is followed is of the taxi operators. Sadly in practice the scene is completely opposite.

At various boarding places, people wait impatiently for the taxis. No decency of forming a line is observed by anyone. When the taxi comes, everyone rushes in even before the passengers get down. For a few moments civilization is suspended and people return to the jungle raj where might is right. So if you have the strength to push and shove your way in, you can find a seat.

No consideration is given to the elderly or children.

The driver either can’t or doesn’t want to do anything. At most some drivers reserve the front two seats for senior citizens.

There have even been cases where people have gotten injured while trying to get into the taxi.

I personally witnessed an old man, probably a patient, get knocked down near IGMC while trying to get on the taxi for Sanjauli. He hit his head and started bleeding. Meanwhile the college students who had pushed him, sat inside trying to avoid everyone’s gaze. People tried to scold them but they pretended as if they couldn’t hear and soon the taxi was off.

I can understand middle aged men and women trying to avoid walking.
But strong and healthy young boys and girls, students of different colleges, are the ones that seem to use these taxis the most. It is a shame that the young generation of Shimla doesn’t appreciate the walking culture and its benefits.

But what is worse is that if you are strong and healthy it is just immoral to use a taxi service that was started for helping the weak and old. Especially if you fight them off to get into the taxi.

We love talking about how corrupt our politicians are and how the government never does anything.

And now that the government has done something good, it’s us, the citizens, who are abusing the service.

We love pointing fingers at others. We say that the government should make sure that the taxi operators enforce the rules properly. But we don’t want to recognize our own responsibilities. The government can only do so much. If we don’t do our fundamental duties as citizens, no government can save India.

So if you are fit and strong and young, you should never wait in line to get into a taxi. Walk because you can and others can’t. The biggest beneficiary of your generosity will be you yourself. Do it for your own health. Do it to keep Shimla’s walking culture alive.

If you still want to use the taxi at least allow elders and children to board first. Don’t push and shove and stop others from doing the same. It is shameful if you think you can’t walk a few kilometers but it is completely unacceptable if you push others who are weaker than you to get into a taxi.

I’ve seen many septuagenarians still preferring to walk while teenage boys and girls prefer to wait for the taxi.

And I wonder if these kids will even be able to stand when they are in their 70s.

I’ll leave you with another quote to inspire you to walk.