Dehra Dun : The Pauri and Tehri parliamentary constituencies in Uttarakhand are perhaps as sprawling as Barmer in Rajasthan and Mandi in adjoining Himachal Pradesh, with equally difficult terrain. It is perhaps because of this that those living in the villages in the upper reaches and interiors hardly ever get to see the candidates of the different political parties, nor do workers reach them to woo them. 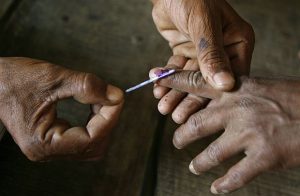 With the state to go on vote on May 7, there are doubts that the candidates of different parties will be able to reach the interiors of these sprawling Lok Sabha seats. Campaigning and canvassing as of now is mostly confined to hamlets and townships that are on the national or state highways, or those that are on the road heads with easy accessibility.

While in some cases the candidates and their workers cannot get into direct touch with the voters because of the difficult terrain or absence of connecting roads and also because of paucity of time, there is also talk that in quite a few cases the candidates or their representatives are afraid to meet the villagers, specially in the areas that were ravaged in the June 16-17 floods last year.

According to reports reaching the headquarters of the two major political parties here, there is great resentment amongst the people against the Congress in particular, because of the shoddy manner in which the rescue and relief operations were carried out after the tragedy had struck the Kedarnath valley.

What has added to the problem of the party workers is the fact that there were widespread rains last monsoons and the damage was fairly widespread and restoration works have not been done to the desired level, which has added to the woes of the people. This resentment it is feared could erupt at the time of voting.

Besides while restoration operation in the Pauri Lok Sabha seat have been very slow, there are still quite a few families who are still living in temporary shelters that were put up in a hurry, as the promised government relief is yet to reach them. These families are at their wits end as they do not have the required resources to reconstruct their houses that were washed away or damaged badly in the floods.

And though the major thrust of the resentment may be targeted against the ruling Congress party, but even the BJP leaders are being taken to task. There are allegations that even the BJP leaders did nothing to put pressure on the state government to provide relief to the affected villagers and also did precious little on their own to provide succor to the needy.

And while the BJP state leaders are to quite an extent banking on its dedicated cadres to reach out to the remote interiors and get in touch with the villagers in the hinterlands for a one-to-one with the voters, the Congress has hired the services of the Meghalaya Paragliding Association to airdrop publicity material and pamphlets in the villages.

They are hopeful that the paragliders will airdrop the publicity material in all the five Lok Sabha seats in the state, but the weather conditions could prove a damper. The paragliders could only undertake their first sortie yesterday after being grounded for almost 13 days because of inclement weather. The weather has been bad for the majority of the time this month and the met department has predicted that there could be more rain and snow in the coming days.