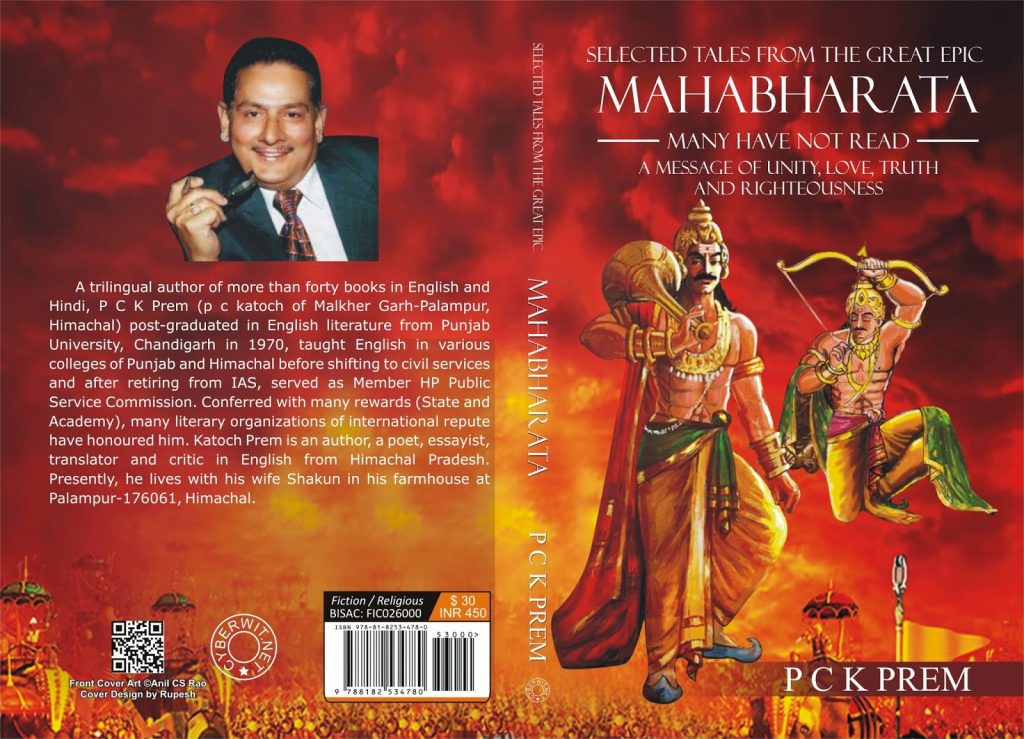 Selected tales from the Mahabharata by the famous writer PCK Prem leave you with a sense of the sublime!

Carefully chosen, compiled and edited by the well-respected senior author take a look at the ageless epic and its continued relevance to us—and the rest of the world undergoing strife and violence in various hot spots.

The book is a treasure trove of wisdom and philosophical thought.

The Mahabharata is an action plan, a code of conduct, a repository of morality and ethics for an entire community, nation and epoch and due to its enduring profundity of message of staying righteous in the face of evil, pure and wicked, the narrative remains a deathless text that resonates with every age and audience.

All epics are like that only. They are the fountainheads of knowledge; kind of blue-print of conduct on the terrestrial plane that can lead to glimpses of the spiritual realms.

Prem’s thoughtful collection in English makes it eminently readable experience for the seekers of truth and dharma in these turbulent times.

It speaks directly to heart.

This sublime generated by a careful reading of the heritage document of the Indians and much admired by the rest of the world for its powerful narration.

The sacred and profane; divine and earthly; superhuman and human; transcendental and transitory interface in the rich texture of the multilayered story produced by a starry age when the gods had not yet departed from the face of the earth and humans, if they wished and practiced a given code and right path, could still converse with the desired deities. Barriers were not there for this type of dialogue.

It is like experiencing the magic of the universe for the first time.

Everything appears fresh and enchanting!

Morning dew drops, glittering little diamonds, on tender grass, under a baby sun spreading a golden hue across the azure sky and a risen earth can produce a deep sense of sublimity in the harried urban viewers and can lead to internal wellness and harmony, provided you are ready to contemplate and appreciate the beauty contained in the mundane.

Identically, certain permanent tales, re-visited, can inspire a similar mood of tranquility and centeredness in the reader seeking answers to some durable ancient riddles confronting post-modern angst and alienation; riddles that have to be solved individually by each soul in this journey terrestrial in order to live fulfilled lives. Moral questions form the core of such recurring inquiries. If solved satisfactorily, the ensuing enlightenment equips humans to face the daunting tasks and existential challenges with poise, strength and resolution.

On the battlefield of Kurukshetra, we all have our agonizing moments of doubts and uncertainties, the Arjun-dilemmas, and a true seeker, with due humility, tends to navigate those treacherous minefields successfully, under the benign guidance of a divine figure, a Godhood, like the blue-God, the fascinating flute-playing Krishna, both a warrior-king and accomplished artiste in his earthly avatar.

Each one of the alert, spiritual and evolved beings (atmans) carries within traces of divinity. We are both the fabled Arjuna and divine Krishna, as they reside within us like the fragrance contained in a flower. Human soul is part of divine consciousness and therefore, capable of realizing nobility and goodness through right conduct in life. This ancient conception of the complex relationship between human nature and nature is very unique and acts as a guiding set of principles, now lost in current age of consumerism. The Gita enunciates this condition eminently well for us.

It is full of deep insights. It is both epistemological and ontological. The truth-seeker has to face some critical moments before undertaking a momentous action affecting the destiny of a nation, community or individual life. With the provisional grace of the Lord, the right seeker, a righteous pursuer/quester, is gently guided onto the moral path of bounden duty, whatever be the consequences then of such actions, epochal or small in nature.

The moments of doubts and sometimes of inner paralysis resulting out of a profound sense of pessimism, a sense of over-riding futility (all actions are futile), if not rightly channeled, can lead to sudden abandonment of the goal by the committed but conscientious doer. A doer— under certain circumstances—who easily gets disillusioned on life’s Kurukshetra and desires to turn back on action and the consequences thereof, sometimes fatal and eventually catastrophic for entire dynasties and nations.

At such profound moments of moral crisis—a state of dulled inertia— enlightenment is most seriously and sincerely sought by a brave warrior only, a warrior unlike others, a warrior no longer interested in kingdom or property that is likely to be achieved after a severe bloodbath and mayhem. Such a noble warrior wants to renounce the bloody war and retreat—for the general welfare of the community caught in the crossfire of two warring armies and factions and thus, by voluntary withdrawal and surrender, wishes to save the lives of the innocent citizens.

At such great crises, appears an extraordinary teller of deathless tales and gives gyaana pure to the willing seeker of ancient riddles and moral dilemmas haunting his sole conscience. Such guide, narrator, can be divine in origin and return the battle-weary warrior to the righteous path of action, a path that illuminates our inner dark pathways and nods us to take up weapons adequate to annihilate evil incarnates and such inimical forces for the general welfare of humanity.

This restoring of a missing moral compass in a strife-torn world of double standards, deceptions, treacheries and a total lack of morality in the blind pursuit of wealth and power, can be most enabling tool of victory over such multiplying cynical forces out to destroy goodness itself and stamp out any residual nobility in the human soul and discourse through repulsive and cowardly actions by the power-seekers of every/any age.

This task of returning our lost or dimmed sense of ethics is done by a divine source generally unaffected by the common erosion of finer values in a decadent society and if attuned to it, we get re-born on the critical battlefield of life.

This is how Arjuna got morally resurrected on that crucial moment on the battlefield of Kurukshetra and re-born, vowed to annihilate forces of evil.

He did. And faced the exhausting consequences of such an inevitable 18-day-long decimating war.

The rest is history. Or cultural history, an enduring legacy that still dazzles.

It is called the Mahabharata.

There are very few stories that can awaken you, revive a dead conscience and exhort a passive soul to become active, a right doer of right actions in the face of total annihilation or such looming threat thereof.

Such scenario can be terribly terrifying for the one who contemplates the absurdity of it all.

The way out is a call, a divine wake-up call, and, the rest is sometimes a painful dark journey that has to be performed, despite the odds, and heavy price entailed.

Stories rooted in an ethics or high morality become real treasures that can never be exhausted, dwindled or depleted by any marauding army.

It shines like diamonds in the open, attracting a willing passer-by to stop and examine. Such stories can be told only in certain early ages—and can be subsequently re-told in succeeding ages.

That epic age produced first the Ramayana and later, the Mahabharata.

The post-modern age is fit for the revisions, re-tellings and most important, re-interpretations.

Such sweeping narratives contain abbreviated worlds within them—entire ways of life, integrated and full. They serve as the beacons or lighthouses for us stranded in our own sinking ships off the coast on stormy nights, giving us hope.

They guide us back to terra firma—and safety and survival in a hostile environment.
Modern stories tell truths but partial truths; these old stories tell complex truths and complete truths that liberate.

They are like the dewdrops encountered on a mildly wintry morning on an open plain outside smog-filled city and become a route to re-connect with pristine nature; a rare sublimity natural. They quickly felicitate a deep communion with creator, the loving God contained in each dancing blade of tender modest grass and brown branch of a rugged tree and a gentle river flowing in the heart of the plain.

Great stories provide us with moral vision, a code of right conduct, a moral inner compass. Despite their strangeness, they give us delight and are truly magical in nature and effect on our psyche.

The great stories are both old and new and we find ourselves re-echoed/re-confirmed/re-affirmed in them. The ageless narratives are sublime and enlightening; ancient and contemporary.

These selected tales from the longest epic in the world, the Mahabharata—curated lovingly by the versatile P.C.K. Prem Katoch and published by Cyberwit—create a wonderful and vibrant canvas for us all. These are tales that explore the marvelous—a style that is a forerunner of the magic realism of the 20th-century—within everyday realty. They are fresh-faced meditations on the very nature of reality, existence, living and death, meaning of love and honour, statecraft, power and class-divisions. Prem Katoch is a great and highly-learned multi-lingual scholar and poet-fictionist of first order and hugely respected for his works on poetics and aesthetics.

The retired IAS (Indian Administrative Service) officer does what very few university dons can do—to patiently collect, translate, edit and explain stories set forth in extremely readable style for us; a heritage-text that needs to be re-assimilated, pondered and internalized again by global consumers, if such a critical species overspending, over-consuming and over-indulging, wants to remain sane and human in a most depressing, degrading and post-human age whose only god is mammon and sole reason to exist is hedonism, pure and uninterrupted.

These tales in excellent English will change their world-view and replenish our corroded selves, making them re-connect with the splendors of a morally-rich past.

They will help us get resurrected morally and ethically.

The select tales are transformative—as all great narratives are meant to be by definition and goal.

One thing is guaranteed: You will not remain same, after reading them here.

The collection will bring in inner/outer transformations—the real job of good stories, be it Ved Vyasa or Homer or Hesiod.

In the great Mahabharata, grand narrative is the chief protagonist.

It is about fallible heroes and destroying of evil through a bloody war, and of clans and empires.

It is also about the futility of war and finding redemption.

Ultimately it is a cautionary tale about the inevitability of your actions and reactions triggered off the former; the tragic results of bigotry and deceptions and the need to remain fixed on the right path, be whatever temptations.

Every being is a sum total of their actions in life.

During crises, God is there provided we recognize Him and believe in Him.

It is a battle between faith and cynicism and of our inner demons as well.

The literary/cultural initiative by Prem Katoch is praiseworthy.

It is a revelatory exercise for us, the interested readers. Epics are not mere story-arcs. They are more than that.

In fact, epics and their re-tellings, engender fresh epistemes.

They bring new perspectives and enlighten us.

For that alone, Prem Katoch needs to be warmly complimented. He has done a superlative job. He is re-negotiating terms of contemporary engagements with grim realities and conducting us back to our lost sense of ethics through this great literary project.

Happy encounter with the wealth of your past!