The movie can be compared to a jinxed metamorphosis that ended up turning out to be a cricket instead of a butterfly. The promos had looked very promising and were very tangy and sharp, but, the movie falls flat on its face. 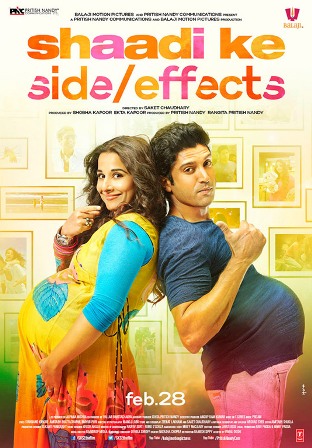 Firstly, the plot will not to be a hit with 49% of India’s population, as it only shows the Indian male going through the trauma of marriage. It never bothered to express the woman’s point of view, except for a few lines that Vidya Balan articulates when the film the climaxes.

The first half of the movie is infectious as the on screen chemistry of Farhan and Vidya is explosive. The audience goes on a roller coaster ride of emotions, believing that soul mates do exist. But after a steamy scene in the first half where Vidya announces that she’s pregnant, the story starts cracking up.

The second half only portrays her like an irrational nag, who has given up her dreams and career to being a full time mother. Farhan seems to have lost weight and looks extremely lean when compared to Vidya.

His timing for humor along with his charm makes the audience empathise and like him at the same time. Dialogues by Arshad Sayed give you plentiful laughs along with gyan on wedding bliss.

This happens to be Vidyas first movie after getting married and she sure lives up to her fans expectations by delivering a crisp and clean performance. But the movie belongs to Farhan, who delivers wit with a straight face and an over abundance of expressions at the same time.

One needs to make a special mention of Ram Kapoor, who seems to be a much sought after actor for doing short but impressionable and witty roles. He plays the know it all brother in law in the movie and offers this worthless piece of advise to Farhan -“Log kehte hai ek happy married life ki buniyad hoti hai pyar, bharosa…bakwas…sach toh yeh hai ki happy married life ki buniyaad hotey hain woh chhote chhote jhooth.”

That seems to be the advice the moviemakers wanted to give all unhappy couples. However, it got lost in an awkward story and a plot stretched beyond need.

Vir Das also lightens up the screen for a little part and does what he does best, creates a riot. Ila Arun plays a sophisticated housekeeper in dark glasses, bad choice of role and total waste of talent.

The music is average except for the track from Ash King and the song shot in Australia, sung by Neeti Mohan and others.

On the whole the movie seems to be inspired by the soaps from Balaji Telefilms, with their sudden twists and turns and unexpected thrills. Go watch it if you are an ardent fan of Vidya and Farhan. Don’t watch it if you are looking for marital advise.

The film has been directed by Saket Chaudhary and is produced by Balaji Telefilms.