Shimla has always been a famous tourist destination and on the historic Ridge child beggars along with tourists can be seen walking in the city. Inspite of law against child begging, the menace still continues to remain tenacious, as thousands of tourists arrive in the Shimla during any season and so, does large number of non-local beggars.

Currently on road to Kalibari temple number of children can be seen begging and following young girls, making their position awkward. Over the past few weeks there has been a rise in child beggars in the city. They not only trouble the populace but even do not hesitate pick pocketing in the busy areas like Mall or The Ridge.

While informing about the problem faced by the people in the city, Sirman Kaur, one of the tourists says, “Child begging is not something new but now these children are getting bolder as compared to earlier times. They come and start shaking your hand to give them money. Some control is definitely required by the authorities.”

“Shimla has never been free of beggars but during the summer and especially during the festive season, child beggars mushroom up all of a sudden. Many of them are not even local but come from other states epically during festival season. We should avoid giving them any financial aid as this only encourages easy money for people who will never work hard in future”, expresses, Neelam Verma, a local resident of the city. 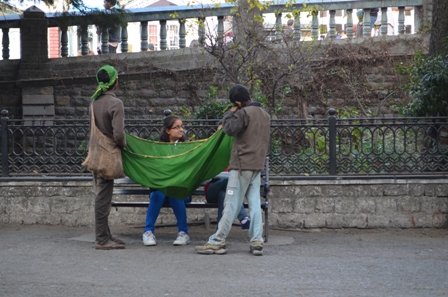 Whereas while expressing his opinion on the situation, Mahesh Sharma, another local resident says, “The deep-seated religious sentiments and superstitions of our country men encourage the practice of begging specially during the festive times. Little children dressed as hanuman or any other deity goes to people begging and people considering it to be auspicious time help them. I think such practice should be taken care of.” 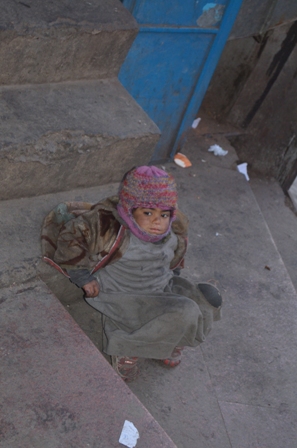 Children are not only begging, extracting money from people’s pocket by using their tactics but now they are also practicing pick pocketing in the city and vanish in thin air. Many people have fallen, victims of such thefts as one of the local resident Monika shares, “I personally saw police caught children and beggars created a scene. Later learned that they had or were trying to pick pocket someone. To get saved from being arrested they created scene to bag people’s sympathy.”

Such problem needs a serious attention as children are the future of any nation. The solution still calls for a comprehensive program and reorientation of the existing programs. Philanthropic approach to beggar problem should be replaced by therapeutic and rehabilitative work.

While commenting on the situation S.P., Shimla, Abhishek Dullar says, “Since economic problem is a fact so we have beggars in the city. During festival season they come from places like Bihar and Jharkhand. They are always mobile.”

“We can rescue them and send them to CWC (Child Welfare Committee) or return them to their parents but often parents are the ones who send them for begging. Since it is our duty we will continue to do it”, he says further.