Dehradun: Perturbed by the alleged molestation attempt of a 28-year-old woman in a Delhi hotel by the ‘rawal’ (chief priest) of the famed Badrinath shrine, that has sent shock waves amongst the Hindu community in general and residents of the upper reaches of Uttarakhand in particular, the Badri-Kedar Temple Committee has decided to ban pilgrims going to the residence of the ‘rawal’ and other priests and dignitaries of the temple for their blessings. 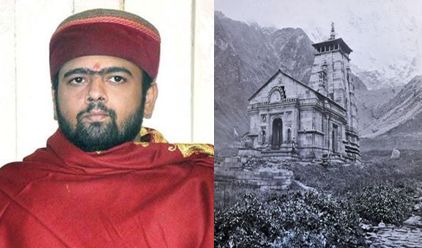 Hoping that this would prevent the pilgrims from coming to a one-to-one meeting with the ‘rawal’ and other dignitaries, and thereby avoid such a situation which has made the head of the Committee members and the Hindu community hang their heads in shame, there was a strong feeling that the practice of going to the residences of the ‘rawal’ and other dignitaries of the temple created personal attachments and relations, which were best avoidable.

Amongst other preventive measures that have been adopted following the arrest of the chief priest of the temple, Keshavan Namboodri, by the Delhi police in the alleged molestation bid, the Committee has also decided that all workers and volunteers working at the temple premises will wear dhotis while in the temple, so that they can be easily identified. It was decided that employees and volunteers not wearing dhotis would not be allowed inside the temple premises.

Even as the special committee formed by the Badri-Kedar Temple Committee to probe into the allegations of molestation by the ‘rawal’ has got in touch with the Delhi police to get information in the matter before a final decision on the continuing of Keshavan Namboodri as ‘rawal’ is taken, it was also decided that use of mobile phones would be banned in the temple premises.

Meanwhile it has now come to light that after the alleged molestation bid, fearing that the woman in question could go to the cops, which could spell trouble for him, the ‘rawal’ is said to have sent SMS to her stating that he was sorry and that the incident had occurred inadvertently, but she did not take heed of the messages and went to the Mehrauli police station to lodge the complaint. The SMS that were sent are now being taken as proof of acceptation of the guilt.