There are average directors, good directors, bad ones and then there are geniuses. The last is a category that has a vision and a creativity pool that is rarely seen in Indian cinema. Imitiaz Ali belongs to this category. So much goes on in that complex head of his that after every movie he leaves one thirsting for more.

His love for women protagonists, romancing the hills and believing in your dreams comes across loud and clear in most of his films. Highway is a film that brings it all together; directed and shot with such brilliance that it is bound to cast a spell on the viewer.

The plot revolves around a hapless woman, kidnapped just before her wedding, finding herself getting emotionally trapped with her tormentor.

People who had written off  Alia Bhat as an average actress, must be looking for nooks and corners to hide in. She’s likes a trigger bomb that was waiting to blow all this while. Mahesh Bhat kudos to your gene pool to gift us with such a brilliant actress.

An outburst from the trauma that she lived as child is a memorable scene in the film. With no fancy clothes, (actually in almost half of the movie the actress has not even combed her hair), and wearing only three pairs of clothes, Bhat still manages to portray a raw beauty.

The movie plot takes you on a journey of self discovery and subtly tickles our whims and fancies about the lives we are living.

Randeep Hooda, one of the most talented actors in our industry today, has put in a performance that can be considered one of his best till date. His screen presence and resonant voice is writ all over the expressions, the outbursts and in the final break down, all an hallmark of a brilliant actor who can carry off any role that comes his way. 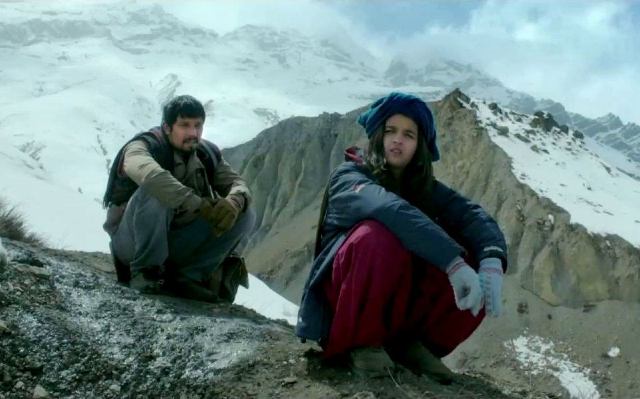 The film shot mostly in the Himalayan state of Himachal Pradesh is a visual treat. Snow clad mountains, virgin streams, pristine blue water lakes and shepherds tending to their flock, transport you to an escape location where we all wish we could run away too. The supporting casts of actors are well chosen and are very effective.

Last, but not the least the movie would have been half impressionable without its  mesmerizing music. A R Rahman has surpassed himself in this one. The background score seems to be actually coming out of the mountains and the rivulets.

Over the years you will always find a track or two dedicated to the Almighty in all of Rahmans works. Tu Kuja is one such song that readily connects you to the other world and livens up your spirit.

The lyrics of Heera are phenomenal and one can hear it on a loop for a few hours at a stretch to sink in the deeper meaning. Patakha  Guddi and Kahoon Hoon Main are excellent compositions that keep playing at the back of your mind for a long time.

On the whole such movies are rare treat and demand the respect an original piece of art deserves. To be able to hold your audience till the last reel and to take them on a journey that leaves them happy, smiling and nostalgic, is not everybody’s cup of tea.

Go watch it and I bet you’ll watch it a second time too.