Dehradun:  Though the New Year is something not to look back upon but just ahead, but taking the past experience of this small mountain state, Uttarakhand since its inception in November 2000, has only been looking back, as things have gone from bad to worse and the hopes and expectations of the masses on achieving statehood have only been dashed. 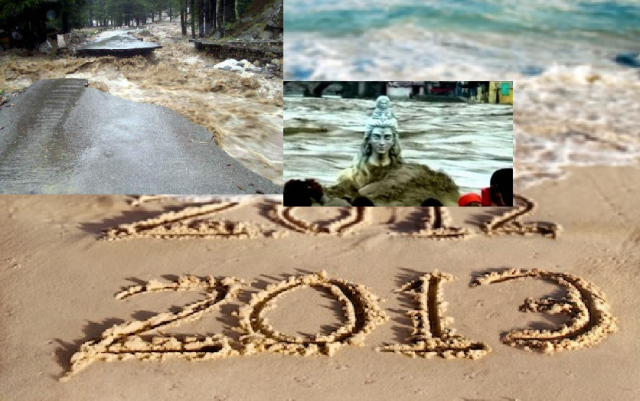 Lack of political leaders with a vision and a babudom steeped in corruption, have been the Achilles heel of this hill state. Whereas in official records things look very bright, but when it comes to ground realities one wonders if the papers are speaking of another state or of Uttarakhand where villages wear a desolate look as entire populations are migrating to townships in the plains in search of greener pastures.

But as one looks forward to 2014, one cannot but look back to the great tragedy of June 2013 as it has more than a direct bearing on prospects of the masses this new year.

There were about 5000 reported missing, thousands feared dead and injured and a loss of mammoth proportions as far as cattle swept away and houses destroyed in the June Himalayan Tsunami as it left more than 22,000 families to the mercy of vagaries of nature.

After the tragedy more than 230 villages were declared very sensitive and in immediate need for relocation, for which the state government even sent a Rs 800 crores proposal to the centre, but even as the residents of these villages hope against hope, nothing has done to shift them to safer places. Though the centre promised all help for the relief and rehabilitation of the disaster hit, nothing has moved on the ground.

Villagers are still struggling to put in place the connecting pedestrian tracks to the villages which were washed away.

With more than 10,000 kms of roads in this small hill state having been either washed away or destroyed in the tragedy and over 160 bridges washed away one can but imagine what is the state of connectivity of villages in the far flung higher reaches and interiors.

Economists here believe that the tragedy may have cost the state losses to the tune of over Rs 20,000 crores, but more importantly the economy has been devastated.

Pilgrimage and tourism, which are the mainstay of the economy of this state have taken a severe beating. The struggling economy has been set back by almost a decade and the char dhaam yatra, on which thousands of families depended for a living, had to be simply be pulled off.

With the absence of both tourists and pilgrims, many small business ventures on the pilgrim and tourism routes are threatened to be written off and their owners who had taken loans from banks are finding it hard to even repay their monthly installments.

With more than 55 per cent of the tourism and pilgrim circuits written off, one can but imagine the state of affairs to the people that thrived upon them.

Even as villagers have been left to fend for themselves under the blue sky, looking at the relief material that has been sent to the state so that they can have just one frugal meal a day, the state machinery has been unable to live up either to the expectations or rise to the occasion.

What else can explain the fact that tons of relief material that was supposed to be distributed rotted in the godowns and was later dumped into the rivers.

Popular rhetoric is that the tragedy has been taken as an opportune moment by the unscrupulous to make money and fears are that a large percentage of the Rs 7500 crores relief sanctioned by the centre after the tragedy will be siphoned off.

It is in the wake of the lackluster governance and fears of a corrupt babudom that the ray of hope during the New Year remains rather bleak.

The political machinery and the bureaucracy which have been denounced by the people and the politicians themselves do not give any promise for improvement of the affairs of the aam aadmi.

This is perhaps why not just the man on the street, but even the Vidhan Sabha speaker, G S Kunjwal said that the people were better off, when the region was a part of Uttar Pradesh, rather than the current Uttarakhand.