Shimla: Chief Minister Virbhadra Singh said that the courts asking the government to desist from entertaining recommendations of public representatives with respect to transfer of government employees was against the democratic spirit. 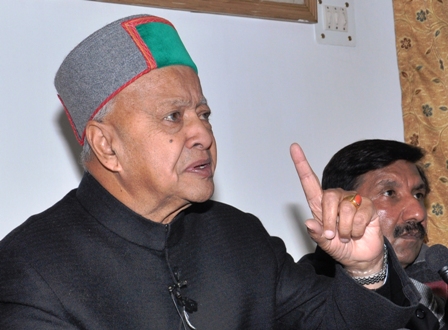 “It is an unnecessary interference of the courts in the functioning of the government,” said Mr. Virbhadra Singh. “After all if we do not listen to people on the ground, how can a government truly discharge its responsibility for which it was elected democratically,” he added.

Speaking on the eve of having completed a year in office for the 6th term, the chief minister was responding to a question about a High Court directive that had struck down some transfers made at the behest of non-executive political personalities and asking the state to frame a transfer policy.

Mr Virbhadra said that though he had the highest regard for the judiciary but he disagreed with this judgment.

“In a democracy, primacy of elected people playing their role was the very basis of the system,” he said.

When questioned whether the government would implement the courts order about extending pension and other benefits to state public sector undertakings, which includes boards and corporations, the chief minister retorted, “that’s not the final word in the matter.”

When pressed whether the state would pursue the matter in the Supreme Court as it had grave financial implications (about Rs 500 crore) on the state exchequer, Mr Virbhadra said, “it is under consideration.”

Rubbishing the corruption allegations being leveled by opposition BJP about the financial dealings of the chief minister family, such as holding shares in some companies that have not been disclosed in the election affidavits,  he said, ‘BJP was behaving like a lost gambler leveling all kinds of allegations.”

He said that the charges in the phone tapping case would soon be placed before the courts.

Speaking about political vendetta, something the opposition has been alleging, he said, “a charge sheet was prepared by an opposition congress party when he was not even a member of the Vidhan Sabha.”

It just happens so that I happen to be the chief minister and it is the duty of the government to enquire into charges of a charge sheet that was submitted to the the President of India and the Governor of Himachal Pradesh.

To regulate sports bodies and not let them operate as fiefdoms of some individuals, the government would soon be bringing a bill for democratic functioning of all sports bodies in the state, said Mr Virbhadra Singh.

When questioned about the AAP party effect from Delhi percolating down into Himachal Pradesh for the upcoming Lok Sabha elections, the 6 time chief minister dismissed it as, “one swallow does not make a summer.”

He asserted, “In Himachal, Congress will be able to hold on our own strength.”