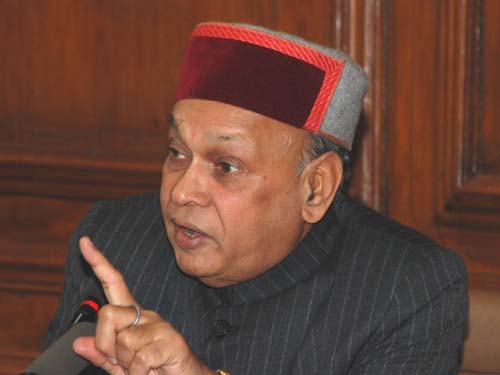 Dharamshala: At a time when the Congress plans to celebrate its one year in office by holding a rally in Hamirpur on 25th December, the BJP has drawn up a counter plan of submitting a charge sheet about the misrule of the government during the year.

Talking to reporters, leader of the opposition Prem Kumar Dhumal said, “we will be giving a charge sheet against the governments functioning through the year to the Governor on Christmas Day.

Earlier, the opposition had stormed the well of the house demanding adjournment of question hour. They were demanding that the house debate the issue of chief minister’s family owning share’s in a company of Vakkamula Chandershekher.

When speaker BBL Butail did not allow the adjournment motion moved under Rule 67, the opposition members continued to shout slogans, which finally forced the speaker to adjourn the house early and 12.15 p.m.

Dhumal alleged that Vakamulla was given undue weightage for allotment of a hydro power project by chief minister Virbhadra Singh.

He added that the project to the Vakamulla company had earlier been rejected on three occasions by an previous congress government and had also lost its case before the Himachal Pradesh High Court.

He said that Virbhadra wife and daughter had 3.40 lakh shares each in ths firm whereas son Vikramaditya held 3 lakh shares in the company.

Documents show, said Dhumal, that Virbhadra Singh and family members took a loan of Rs 7 crore at a 12 percent interest rate where as there was already about Rs 10 crore languishing in their bank accounts which was accruing interest rates at only 4 percent per annum. This transaction has not been shown in the affidavits filed before the income tax officers.

It was Arun Dhumal, son of the former chief minister,  who at a media conference here yesterday had distributed copies of Vakkamula’s company showing Virbhadra Singh’s family members having substantial shareholdings in his company.