Nutshell: Love story of a materialistic guy and an environmentalist girl, which sees a happy ending with building of a much needed bridge in a remote village.

Punit Malhotra’s Gori Tere Pyaar Mein is one of those hollow love tales which become far-fetched as the reel rolls on. Although, high on entertainment (in parts), the movie’s second half lacks authority to match whatever little interest generated in the first.

The Delhi based Punjabi gori Dia Sharma (Kareena) is a self-proclaimed social worker who wants to fix everything in the country with her morchas, dharnas and bhookh-hartals.

But, redness of her cheeks and buff on her glossed lips remain undamaged surprisingly even while walking on dust-laden village roads. That’s more typical of 90s filmmakers. Isn’t it Punit?

Then, one day she comes across foreighn educated architect Sriram Venkat (Imran Khan) who doesn’t lament for a lemon in life. He finds himself more of an oddball, maybe for his fair complexion (racist? Was it?), among his lungi clad Tamil Brahmin family members (settled in Bangalore) who are pompous of their stereotype mindset. 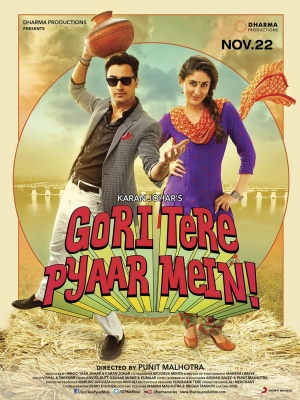 Both knock in each other at a wedding and Cupid strikes in typical Bollywoodish style with musical scores running on ludicrous lyrics in the background.

However, both Sridevi (Imran is called fondly by Kareena) and our ‘Mother India’ decide to separate as their ideologies start clashing post one-and-half year long courtship. A hint of ‘2 States – A story of my marriage’ by novelist Chetan Bhagat finds space in some parts.

But, Sriram realizes his ‘Dil’ still beats for his ‘Mother India’ and runs away from marriage, which was arranged by his parents with Vasudha (Shraddha Kapoor), in a delightfully crafted humorous scene. By the time Kareena had settled in a village called Jhumli (a make believe village) in Gujarat.

The story that begins from here can be branded as a blended version of Swadesh, and Lagaan. The narrative in the second part shifts completely to building a much needed cemented bridge in a village that is as weird as its inhabitants.

The chicketarian hero who is a ‘bechari chokro’ for the villagers has to unwillingly rely on dhoklas for his survival. Even song from his mammu’s blockbuster Lagaan ‘O mitwa’ isn’t able to add up a feeling of village life.

Sriram eats, lives, and sleeps with his Ray Ban sun glasses on and even helps his gori with her dream of building a real bridge in place of make shift rope-pathway, Ray Ban still intact. God job Ray Ban marketing team!

Meanwhile, he learns to adore gareebs and smell of gobar, ‘Mother India’ fights for rights of villagers on every platform. She also does 3 idiots in the movie while helping out a pregnant lady in delivering a girl, despite being completely untrained for the job. It was Chanda the goat, whom she helped with her delivery, the last time. Now, this takes something to digest. Phew Phew!

Anupam Kher is a collector in the village, who is as crazy as his Mercedes loving son, and a literally dumb father. A collector is a high level administrative officer and not a panchayat pradhan as portrayed in the 2 hours 27 minutes long movie. Check out your facts Punit? But Kher did do justice to the wicked cameo he played.

The leading pair appears no different in songs from their last appearance in ‘I Hate Love Stories’ which was a dud at box office.

Arshad Syed and Punit Malhotra should have spent more time in countryside before penning down the second half of the script. Music by Vishal-Shekar is just good to dance drunk on the floor of a small town discotheque.

Imran has improved as an actor with the movie. Kareena was reasonable too but shining white 24/7 with ‘Ujala’ washed clothes doesn’t go down well in dusty village surroundings.

Also, it’s surprising to see a green and rusty architect, who isn’t sure of his own abilities, supervise the entire construction work. Too much of Lagaan and Swadesh has made the mockery of the movie in the second half. Karan Johar seems like selling bridge to the audience and, ACC sponsored one too!

But, Punit may not find Narendra Modi supporters going for the movie, for projecting Gujarat’s village in such a poor light (pun intended).Go for it, with the movie critic within you dumped back home. It’s surely entertaining, but only in parts.

The movie gets 2 ½ stars on the scale of 5 from Hillpost.