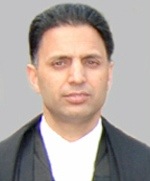 Shimla: Justice Mansoor Ahmed Mir has been appointed as the acting chief justice of Himachal Pradesh High Court. Justice Mir comes in place of  Justice AM Khanwilkar, who has been transferred as Chief Justice of Madhya Pradesh.

A spokesman of the HP High Court confirmed having received the President’s warrant appointing Justice Mir as the acting Chief Justice of HP High Court. Following the appointment, the new acting chief justice is expected to be appointed as a full chief justice of the court soon.

Justice Mir belongs to Pulwama in Jammu and Kashmir state. Having obtained a law degree in 1978, Justice Mir practiced as a lawyer till 1993 before joining as a district and session judge.