Bhartiya Janta Party (BJP) announcing Dr. Harsh Vardhan as the chief ministerial candidate for Delhi , the newly floated Aam Aadmi Party (AAP) has already won the first battle in the run up to the assembly polls.

Centering its election campaign on corruption, Arvind Kejriwal led AAP has forced its counterparts to field candidates with a clean image. 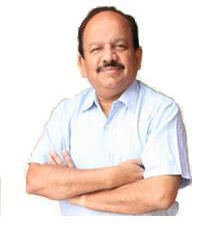 A tough contender with a clean track record and impressive biodata, Harsh Vardhan may turn out to be a challenge that Kejriwal and AAP have asked for.

But for the time-being, AAP can take credit for its first victory in the long battle ahead by forcing an overnight change in the BJP’s chief ministerial candidate. The latest move by the saffron party comes up with a clear intention of countering Arvind Kejriwal’s clean image.

By picking Dr Harsh Vardhan over Vijay Goel, BJP has indicated that leaders with doubtful integrity in the public  domain can be overlooked, should there be somebody out there with a better score in public life.

Working on the same lines as the AAP, BJP even followed up with coining a new catch phrase– imaandar vyaktitva, jimmedar netritva, shashak nahi, sevak badlenge Dilli, badlenge bharat. The AAP effect is definitely working some magic at least in the ideology of the political establishments of the state.

However, here comes a catch for the AAP. Earlier fighting elections on the primary issue of corruption and targeting the other two political parties on the same basis, AAP now finds an honest competitor standing on the other side. Although, AAP may welcome the latest development, this progress may cut down it vote bank.

Dr. Vardhan can be a newly evolved option for the people of Delhi.  They are now in a better position to choose from.

Till now those who had no other option but only Kejriwal and his AAP, based on his mass appeal and honest image are wishing Harsh Vardhan and his party comes out in winning colors as does enjoy a solid backing from the party high command.Harsh Vardhan is a veteran Rashtriya Swayamsevak Sangh (RSS) worker and is close to the party’s national leadership.

There may be some who will contest the point arguing Sheila Dixit’s government for the past 10 years had constant backing from the UPA I and the UPA II but very little seems to have been done on the ground.

But here is a leader who has been 4 time legislator and former minister in the state cabinet. The National Polio Surveillance Project (NPSP) introduced under his purview as health minister of Delhi was adopted as a model and executed throughout the country.

The pilot demonstrated by Dr Harsh Vardhan was instrumental in the eradication of  Wild Poliovirus Type 2 from India by 1999.

Possessing time tested credentials, Harsh Vardhan surely holds an edge over AAP leadership for an alternate leadership, should the Dixit government be ousted.

Where AAP has been harping on a honest and upright leadership, besides Arvind Kejriwal and few among the first-line leaders in his party, not much is known about the honesty & leadership proficiency of the candidates fielded by AAP. Who knows how they will perform if behave after they win their assembly seats?

To retain its image of honest and upright leaders, AAP interestingly changed its Shahdra candidate after there was an exposure about doubtful integrity of Surendra Sharma, the candidate first announced by the party.

Whatever the poll results be, AAP is surely bringing about radical changes in the way political parties think and function in the country capital.