The case for One Rank One Pay (OROP)for the three defense forces (Army, Navy & Air force) seems to be going nowhere for over forty years. Successive governments have agreed in principle to implement the same but all have limited their willingness to political rhetoric only. 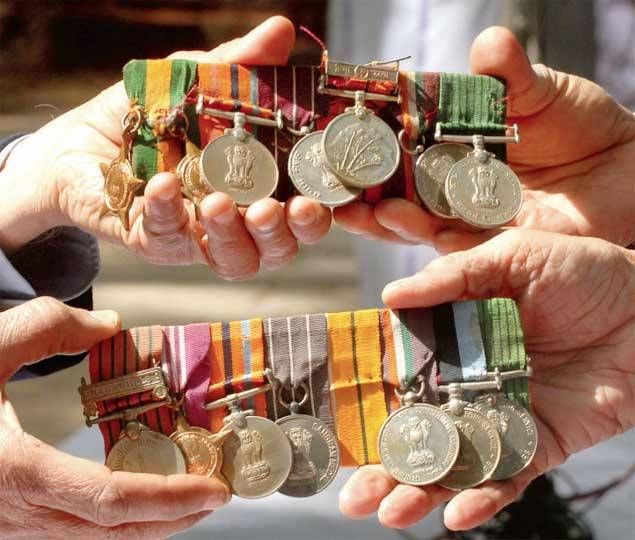 The pertinent question that is crying to be answered is if the successive governments were serious about the whole issue or were they just taking the uniformed lot for a ride. The various Congress led governments paid a lot of lip service over the last many years and finally in the last year of the UPA II government they did agree in principle and allocated a paltry sum of Rs 500 crores in favour of OROP in their last budget for FY 2013-14. Obviously that was a stalling technique since no implementation was possible with the measly sum allocated.

It was indeed surprising to see the erstwhile UPA II Defence Minister claiming on national television a few days ago that he and his government had decided to implement the OROP but the current BJP government was not doing the needful. Mr Antony, as has been his wont, continues to play his ineffective, no result brand of tricks even today after having left the armed forces in a limbo for many a years while he was the defense minister on matters many times more serious than the OROP. Other Congress spokespersons too would like the forces to believe that the main villain in the matter is the current NDA government since the UPA government had given a go ahead for the OROP. On the question of why it was not implemented in last 40 years that saw mainly Congress rule in the country, none of them has any plausible answer.

The current NDA government and Mr Modi in particular made no bones about their intention of implementing the OROP, both during the run up to the national elections last year and once they came to power. In light of the Prime Minister’s personal emphatic assurances on many occasions thereafter, the forces were certain that the case would see the light of the day in a reasonable time frame and without the need for pushing the issue all over again. But once again they were proved wrong not realising that a politician will always be a politician first. Unfortunately they do not understand the language of patience and discipline since they have been brought up on a diet of rabble rousing, agitation and brinkmanship.

These unsavoury attributes cannot be found in men in uniform who always stay away from such uncivilised ways of seeking redressal of their grievances or demands.  So no wonder the OROP case has been doing the rounds of the corridors of North and South Block for well over forty years. If instead the armed forces were to act like the Gujjars of Rajasthan and take recourse to blocking railway lines or roads, may be the government would have given in to this demand many decades ago. After all the Gujjar community has had its demand met in just a matter of seven days. But then Indian armed forces have always been known for their dedication, discipline and good conduct across the world for centuries.

It is to the credit of the quality and effectiveness of the training imparted to a soldier during his active life span with the forces, that even a retired soldier is no different. He continues to uphold those coveted values even if it means he has to lose out on some very legitimate and essential needs for himself and his family. That is part of the sacrifice he makes willingly once he dons a uniform.  Would the forces change their attitude for a little more remuneration? The answer is a firm ‘No’. If that were to happen the nation will lose its only really true nationalistic asset and that is a frightening thought indeed.

One of the reasons that is being put forward by many in the government for the delay in implementation of the OROP is that the modalities of working out the revised pensions based on OROP are being carried out and the delay is because of the complications involved in implementation of the scheme. In today’s world of computers and software programming, such explanations for the non-implementation of OROP hold no water, instead they only imply that either the decision making is lacking or the intentions are not straight.

The same government departments did not bat an eye lid in implementing the more complicated Non-functional Upgradation (NFU) scheme, for Director level officers who belong to 58 different services under Organised Group A Services, when it came up for implementation. The reasons for such efficiency and trouble free implementation are not difficult to fathom since the all ‘babus’ in the nation were the beneficiaries of this unique scheme that ensured higher remuneration in the form of a backdoor entry to every officer of the batch from the day the first officer in that batch was promoted to the next level in any government department. It was termed as a ‘pay promotion’ that ensured that all ‘babus’ of the same batch always got similar remuneration. It effectively threw out the annual confidential report or performance appraisal out of the window. Of course such generous schemes have no place when it comes to the armed forces.

It is a known fact that the Armed Forces have always been treated shabbily by the civilian ‘babus’ in the ministries. The fact that the men in uniform have no competition with any of them is of no consequence. The civilian ‘babu’ has always been envious, amounting to jealousy, of the man in uniform for reasons best known to him. This failing of the ‘babu’ has resulted in a deliberate anti-uniform attitude in anything and everything that comes up before him in any government ministry or department. No wonder equipment procurement files and other proposals from the armed forces continue to gather dust for years in the corridors of the North and South blocks at the cost of compromising the war preparedness of the forces or addressing the needs of the humble soldier. Can one forget the various anomalies that come up each time a new pay commission is set up and its report finalised.

It is no surprise that these anomalies invariably favour the ‘babu’ over the man in uniform. The ‘babu’ will go to any distance to make sure that the soldier’s entitlements are cut at every stage while those of his ilk, from within the administrative service, are padded up at each stage. Is it any wonder then that today a Joint Secretary in the government is equated to a Major General in the Indian Army? It is of no consequence that the Major General has to clear three selection boards, render about 25-27 years of distinguished service and be within about 0.8% of the officers of his batch to reach that position. On the contrary the Joint Secretary has to just to complete about 18 years of service, does not have to face any selection board since the position is only based on length of service and nearly 100% of batch mates make it to the level of the Joint Secretary. One can understand and accept some anomalies in any such hierarchical system, but glaringly convoluted and deviously crafted rules to favour some over others is surely not what a system needs or should accept.

The fact that the politician has overlooked and kept quiet while all this was happening speaks volumes about our elected leaders, who do not give a fig about the well being and interests of the armed forces. After all it is the ‘babu’ in the ministry and not the man in uniform that will help him in his evil designs to accumulate power and money. A soldier’s honourable conduct and nationalism have always been taken for granted. Politicians know that an Indian soldier will neither protest nor compromise with his duty whether or not his legitimate needs are met. This is what the politicians have exploited over the years and as a direct consequence of this have never shied away from snubbing the man in uniform. If an accident happens in a roadways bus or a train, politicians line up with cheques in hand to compensate the victims to develop future vote banks. If a protestor dies in a riot, his family is compensated with similar doles.

If a policeman dies in line of duty, adhoc payments are rushed to his next of kin. However if a soldier dies in the line of duty for his motherland, his family finds it a herculean task to get even his normal dues in a reasonable time frame where a state or national government is involved. Yet the soldier – soldiers on without a complaint while the unfortunate dependents of the deceased soldier keep on running from pillar to post. The nation will never understand what makes this soldier so immune to this callous, ungrateful and unconcerned system. Possibly the soldier too does not understand the same since all that he believes and lives for is to defend his motherland even if it means laying down his life at some point of time.

The question that still needs to be answered is will the Armed Forces get the OROP? The answer is yes they will and as things stand today it may see the light of the day within the current calendar year. However what is also equally true is that the current government has lost a lot of credibility and goodwill that had been generated when they came to power. The enthusiasm of the soldier will be very subdued as and when this scheme is announced in the next few weeks or months.

The government will try to make a lot of noise to seek political advantage when they announce the implementation but the fact remains that the soldier, serving or retired, is not likely to pay much heed to that. It is unfortunate that many of the retirees, who genuinely needed this enhanced pension, have already gone past the stage where they could take benefit of the OROP. The ones who join the retiree club in future will not find much substance in the whole issue since for them it will be a given thing. Somewhere in some corner of his heart, each and every soldier, retired or serving, will feel that he was let down by the establishment for the simple reason that he had been ignored for forty long years. But the good part is that no Indian soldier will allow this disappointment to affect his performance or dedication to the service of the nation. After all it is not said for nothing that- Once a soldier always a soldier.