Dehradun : Intriguing! Gunshots fired at a dinner party of Uttarakhand agriculture minister Harak Singh Rawat on 17th September  night. Two persons were injured, one of them has been admitted to hospital and is in the ICU, but no arrests have yet been made even after over 40 hours.

Not only this the FIR that has been filed in the case is against unknown person, despite the fact that local television channels and newspapers not only named the accused, but also carried his pictures, but apparently efforts are to hush up the matter. 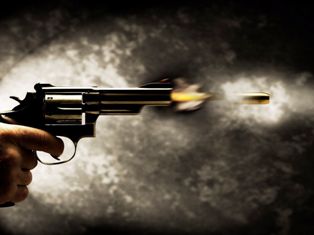 What is more surprising is the fact that at least two important ministers of the Bahuguna government, both women, the host, agriculture minister Harak Singh Rawat himself and a number of Congress leaders and others were present, but the police is yet to get an eye witness.

Not only this, one of the injured, who is admitted to the ICU ward of a local hospital here, has also not given any statement to the police regarding the incidence. All that he has said is that he is not aware of how he was injured, even as the opposition BJP leaders have demanded a magisterial enquiry.

The reason for the discreet manner in which the incident is being looked into, is because of the fact that the person accused of firing the shots from his licensed revolver is a Congress leader and party MLA who holds an important position. The persons who were hit are also Congressmen and the venue of the firing is the residence of a Congress minister.

And as to hwy his name was being played up in the incident, he claimed the opposition BJP leaders were trying to frame him up as had been their wont in the past also. And as for the injury to the person admitted in hospital, he said it was probably stones that went flying because of the fire crackers.

And when asked about the opposition demand for a magisterial enquiry into the incident, Vijay Bahuguna side tracked the matter saying that the state police was efficient enough to probe the matter and was investigating the matter.

But the incident has become a talk not only in the capital but the entire small mountain state, with people asking why different set of rules for VVIPs and the common man. Would the state police have behaved in a similar manner if the accused and the victim been common men and the eye witnesses also not from the elite of the ruling party, is what everyone seems to be asking.