Shimla: Apple, from being a crop of boom, has turned into one of doom that hapless orchard owners in Himachal have had to live with this harvest.

Fungus has eaten into the trees leaves, fruit prices have crashed and even a government company that entered into a contract for buying 70,000 boxes is going slow in honoring it commitment, much to the anxiety of the farmers.

“Fresh and Healthy Enterprise, (FHE) a wholly owned subsidiary of CONCOR, a Railway Ministry Company, has left us high and dry,” says Rajeev Thakur, an orchard owner from Ratnari in Shimla hills.

Having entered into a contract for buying his father’s entire apple crop 18th August for rates ranging from Rs 630 to Rs 1225 per box that on average should weigh 23 Kgs, the field staff of FHE have not come back for more than two weeks after lifting the first consignment of 200 boxes.

Not just him, but many orchard owners in Rantari village and others in the region have been left in the lurch, not knowing what to do with the crop that on paper stands sold to the Container Corporation of India subsidiary.

“We are not going anywhere but will honour our contract commitments,” said P Alli Rani, CEO of FHE when contacted on phone.

She denied that the fruit purchasing had been deliberately slowed down. “Against a till date target of 5000 boxes, we have already purchased 6000 boxes,” said Rani. 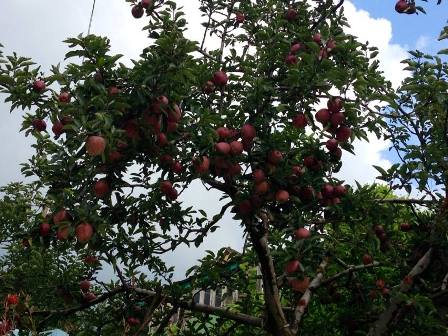 She claimed that the government subsidiary was under extreme pressure to wind up marketing of apples as FHE had run up losses of Rs 66 crore in 6 years of operation.

“We are the only company that is buying apples at a pre-fixed price, and traders in a market that has crashed are trying to dump their fruit on us,” said Rani.

“Where we have a capacity of handling only 15 tons of fruit a day, daily arrival of 30 tons has left us with heavy losses,” she added.

In all, the railway subsidiary has entered into a contract with 930 farmers for buying 8000 ton apples from Shimla hills and an additional 4000 tons from Kinnaur.

The fruit bought at the farm gate is transported to Rai in Haryana, where it is graded and then stored at CONCOR owned controlled atmosphere (CA) storage warehouse, to be marketed at a later date.

Other than the marketing glitches with FHE, the prolonged rainy season has led to widespread fungus infections in orchards causing a premature leaf fall that has affected the fruit quality.

For a fruit that in good times sells anywhere between Rs 1500 to Rs 2500 per box, a current market price of Rs 400 to Rs 700 is forcing many to make distress sales.

Not just FHE, but Adani Agrifresh, a private company that has invested Rs 150 Cr in setting up 3 grading lines and CA stores, has several times revised the fruit procurement price on the downside this season.

Senior BJP leader and former horticulture minister Narinder Bragta, who has held several protest demonstrations in the fruit bowl belt says, “The day is not far, when one would hear of orchard owners committing suicide in the apple producing belts of Himachal Pradesh.”